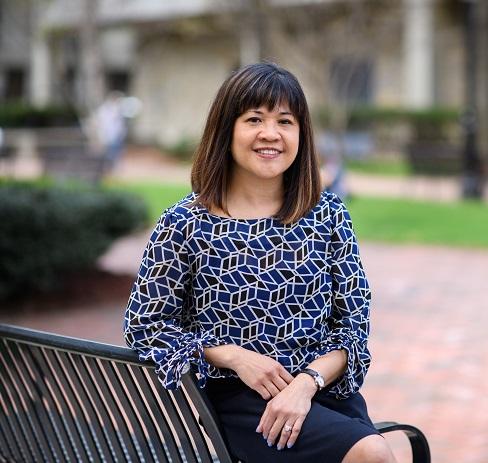 Rose Cuison-Villazor is the first Filipina-American Dean of a U.S. law school.

“We’re thrilled to welcome Rose into her new leadership role,” said Rutgers-Newark Chancellor Nancy Cantor. “As vice dean, she proved herself to be a remarkably quick study and exceptionally talented organizational leader, mastering the breadth and depth of administrative responsibilities while remaining an extraordinarily productive scholar, teacher, and mentor. She is perfectly positioned to carry forward the law school’s legacy of providing an excellent and inclusive academic environment that is rooted in social justice.”

Cuison-Villazor, an expert in immigration and citizenship law, has served as the Vice Dean of Rutgers Law School in Newark since July 2019. She also is the founding Director of the Center for Immigration Law, Policy and Justice. She replaces former Co-Dean David Lopez, who stepped down as of July 1 to return to teaching as a Professor of Law.

“I am excited to lead Rutgers Law School in Newark this year as we return to campus and our classrooms,” she said. “I am looking forward to working with the law school faculty and administration to provide an academically robust legal education program while continuing Rutgers University-Newark’s role as an anchor institution, and meeting the needs of the Newark community."

A nationally regarded legal scholar in the areas of immigration, citizenship, property law and race and the law, Cuison-Villazor has published in top legal journals including the California Law Review, Columbia Law Review, Michigan Law Review, and NYU Law Review, among others. A frequent public speaker, Cuison-Villazor has appeared on CNN and has offered commentary for several news outlets, including the New York Times, Washington Post, NPR, LA Times, and The Atlantic. Co-editor of two books, The 1965 Immigration Act: Legislating a New America (with Jack Chin) and Loving v. Virginia in a “Post-Racial World”: Rethinking Race, Sex, and Marriage (with Kevin Maillard) published by Cambridge University Press, Cuison-Villazor is also co-author of leading casebooks on immigration, race and property law. She has testified before Congress and the California and New Jersey state legislatures. In 2011, she received the Association of American Law School’s Derrick Bell Award.

She will work closely with Rutgers Law Co-Dean Kimberly Mutcherson, who oversees Rutgers Law School in Camden. Mutcherson said, “I have known my new Co-Dean for many years, first as an admirer of her scholarship and then as a colleague and friend. Having worked very closely with her while she was Newark’s vice dean, I could not be more thrilled to have someone of her caliber running Rutgers Law with me. I am excited about our plans for continuing to move the law school forward.”

Previously,  Cuison-Villazor was Professor of Law and Martin Luther King, Jr. Hall Research Scholar at the University of California at Davis School of Law. She has also taught at Columbia Law School, Hofstra University Law School and Southern Methodist University School of Law.

Cuison-Villazor teaches Property Law, Immigration Law, Critical Race Theory, Asian Americans, Pacific Islanders and the Law, Estates in Land and Future Interests, and Introduction to U.S. Law. Committed to the expanding legal education and creating pipeline programs, she has taught pre-law courses for high school and college students. She earned her LL.M from Columbia Law School, J.D. from American University and B.A. from the University of Texas.

Cuison-Villazor will serve as interim dean as Rutgers University conducts a formal national search for a permanent Co-Dean.