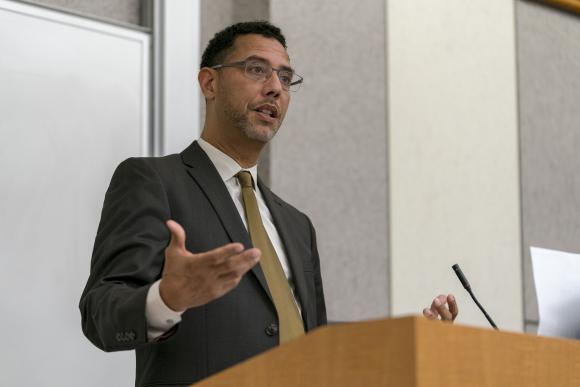 Following a year of unrest after police shootings of Black people across the United States, Rutgers Law Professor David Troutt, founder of the Center on Law, Inequality and Metropolitan Equity (CLiME), did a comprehensive study on the issue of police misconduct and the structural reasons why it’s difficult to hold American police officers accountable for misconduct and bad behavior.

His study “Brutality by Design: Understanding Police Misconduct as Structural Inequality” co-authored by CLiME fellow Gatien Laurol RLAW ’21, looks at the history of policing in the U.S. as well as the laws and relationships between police and other law enforcement branches, to better understand why police rarely get prosecuted for criminal behavior.

The study cites several current structures in place, including:
•    Qualified Immunity for police officers
•    Officers being personally indemnified from paying court judgements
•    Police union influence and the power of arbitration
•    The close relationship between police departments and prosecutors
•    Other barriers to prosecuting police misconduct

Troutt and Laurol looked at national statistics, lawsuits, police-involved shootings, legislative changes, and other data, then recommended changes that would create better police accountability and a safer overall structure for all residents, including Black Americans.
Among their findings were that there is no national system for reporting police misconduct; that the use of force is disproportionately used against Black suspects; that prosecutors are often reluctant to criminally charge police; and that when an officer is disciplined, that officer is often allowed to have the matter resolved through arbitration. The study also pointed out the deep polarization that exists in American in 2021, that divides the country radically over whether police misconduct is a crime.

“If we are serious about dismantling the structure of racial inequality—and myriad legal, moral, economic, social and democratic reasons demand that we do—then making transformative change in violent police behavior is an overdue imperative on the way to becoming a more just nation,” says the report.

In addition, the report cites the difficulty in bringing a public action against a police officer because of arbitrary standards, qualified immunity, and indemnity from financial judgements. Troutt and Laurol suggest a series of steps that would improve the fairness of the structure for disciplining officers, including: limiting police union authority; reallocating municipal police funds for mental health, conflict mediation, and other resources; withholding police funding for institutional abuses; demilitarizing the equipment and tactics used by police; and instituting legislative changes.

This is the second timely report on issues involving metropolitan equity that CLiME has released this spring. The first report, “Homes Beyond Reach” looked at the need for affordable rental housing in Newark, which was exacerbated by the pandemic.