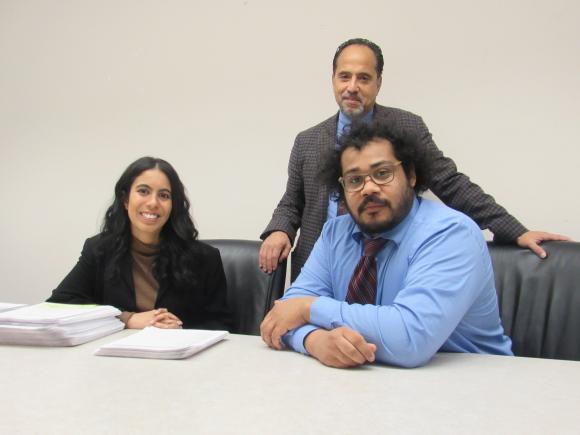 A 42-year-old Newark woman who suffers from physical and mental disabilities, was immediately awarded retroactive and ongoing SSI and Social Security Disability Insurance benefits from the United States Court of Appeals for the Third Circuit, thanks to the work of the Rutgers Civil Justice Clinic and the supervision of Clinical Dean Jon Dubin, whose clinical students represented the client in two layers of federal courts.

The case was a rare decision by the Court for Appeals. Judge Margorie Rendell, writing for a unanimous panel, issued the opinion in November.  The client, a woman identified as “MTN,” should receive a substantial award of retroactive benefits since her applications have been pending since 2012.

Several Rutgers clinical law students played a part in this victory. Micauri Vargas ’20, worked on the 35-page Third Circuit reply brief over the summer and helped prepare Dubin for the oral argument by mooting him and second chairing his argument before the Appeals Court in Philadelphia in the late summer.

Other law students also contributed to the successful outcome. The principal Third Circuit student team-- Dylan Newton ’19, Sharon Aguirre ’19, Alexander Fontaine ’19, and Nichole Rohan ’19 --drafted the main 73-page brief on the merits in the Appeals Court and handled the motions and preliminary filings. John Rinaldi ’17 and Peter Szfranski ’17 handled all of the work in the lower federal district court and drafted, filed, and served the complaint, the 16-page local rule preliminary statement, 40-page formal merits brief and 20-page reply brief.

Another former student, Stephanie Carney ’15, worked on the pre-trial brief and handled the full federal administrative evidentiary hearing representation of the client through her work as an Essex-Newark Legal Services summer intern.

MTN suffers from a combination of lupus, degenerative spinal disc disease, depression and anxiety, due to experiencing family abuse, sexual assault, and domestic violence. Her psychiatric symptoms include sleeplessness, crying spells, panic attacks, and self-injurious behavior. Despite her health history, she was denied benefits from the Social Security Administration by an Administrative Law Judge, who speculated improperly about MTN’s ability to work based heavily on her ability to raise her children and complete online college courses.

The Third Circuit Court rejected this reasoning, declaring that: “disability does not mean that a claimant must vegetate in a dark room excluded from all forms of human and social activity.” The Court pointed out that there was no evidence that supported MTN’s capacity to perform competitive work and concluded that the previous ruling relied on reports by agency doctors who never examined or met with the client and lacked the full records of doctors who did. The Court also found  that the Social Security Judge did not give sufficient weight to MTN’s treating psychiatric specialists and their assessment of the client’s limited capacity.

“This case showed us the power of emotionally compelling facts in unison with strong legal analysis,” said Nicole Rohan, 19’. “The court cited our brief a lot and its thrilling to know that the heavy workload all of us put in paid off and will make a positive difference in our client’s life.”

Social Security is the American income support program most responsible for helping indigent families and individuals escape deep poverty.  "With the evisceration of the social welfare safety net for the poor over the past few decades, these cases have sometimes become almost life and death struggles for subsistence;  at the same time, winning appeals on them in the Third Circuit has become correspondingly difficult, and obtaining an immediate award of benefits from that court has become an extreme rarity," Dubin said. "I’m very proud of the several classes of clinic students for their hard work and dedication to our client and her case which led to beating the odds with this extraordinary result.”

The MTN decision is the 11th successful Third Circuit social security appeal led by the Rutgers clinic since 2000, most resulting in new trial-type hearings before a social security judge as opposed to an immediate benefits award.  In the Civil Justice Clinic’s last victory after a Third Circuit appeal, that client, a formerly homeless person, eventually received $130,000 in retroactive social security benefits, and was able to purchase a modest home to end his homelessness.