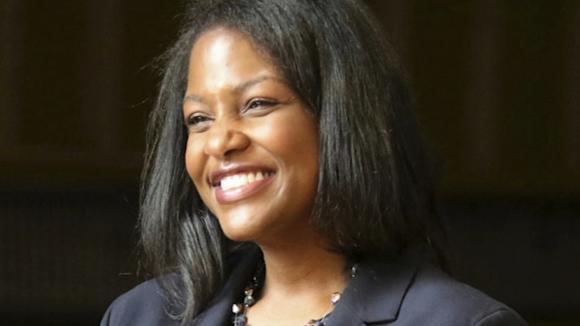 The New Jersey Senate confirmed Fabiana Pierre-Louis, a 2006 graduate of Rutgers Law School in Camden, as the next justice on the New Jersey Supreme Court, by a unanimous vote of 39-0. The confirmation came after the Senate Judiciary Committee voted 11-0 for her on Monday.

After the unanimous vote, Pierre-Louis, her husband, and two sons, were invited to the floor of the senate chambers for a photograph with senate leaders. She will be the first Black woman, and the third Black Supreme Court justice in New Jersey’s history.

"I'm thoroughly impressed with her, not just as a lawyer, but as a person," said Sen. Nicholas Scutari, the chair of the Senate Judiciary Committee, who spoke of her academic credentials, and legal acumen.

Sen. Troy Singleton called it "a historic day" and said she is uniquely qualified because of her legal knowledge and because of the content of her character. "She's going to be a shining example on this court."

Sen. Richard Codey said she was chosen for her qualifications, not because of her gender or race. "I wouldn't be surprised, years from now, if she will be the chief justice," he said.

Rutgers Law administrators, who know Pierre-Louis, said she was well-derving of the honor.

“I can think of few people who are more qualified to sit on the highest court of our state,” said Rutgers Law Co-Dean Kimberly Mutcherson. “Fabiana is incredibly smart and a superb lawyer. Equally as important, she is thoughtful, compassionate, committed to the rule of law, and to a fair and unbiased system of justice. Having known Fabiana for many years, I’ve no doubt that the people of this state would be well served by a justice who brings her skill set and background to the New Jersey Supreme Court.”

During her 45-minute hearing before the Senate Judiciary Committee, Pierre-Louis, 39, who was accompanied by her husband, two sons, and other relatives said, “This nomination is truly the honor of a lifetime,” according to NJ.Com

Rhasheda Douglas, assistant dean of the Minority Student Program at the Camden campus of the law school, has known Pierre-Louis since she was a second-year student at Rutgers Law School. “Fabiana is a shining example for our law students, alumni and aspiring law students.  She is brilliant, humble, kind and committed to pursuing all of her endeavors with a spirit of excellence.  She is a person of integrity who has worked diligently to develop excellent advocacy, research and writing skills that will continue to serve her and the State of New Jersey well when she begins her tenure as a Justice of the New Jersey Supreme Court.”

“Her commitment to service is exceptional, and she has often answered the law school’s call for her to speak with our current students.  In fact, when Rutgers Law launched its Professionalism Series to help equip our students with soft skills that are essential in the legal profession, Fabiana and fellow alumnus Lloyd Freeman RLAW ‘ 07 kicked off the series by speaking with our first year law students about the importance of developing a professional brand. The students were on the edge of their seats, as they listened to Fabiana speak about how her immigrant parents’ lessons on hard work and integrity are integral to the principles that have guided her in her legal career.  She also spoke about the opportunities that she has been afforded due to the quality education that she received at Rutgers Law.”

“In a nutshell, Fabiana’s story demonstrates why it’s critically important for law schools to remain committed to ensuring that students from modest backgrounds have access to legal education.  With opportunity, access and resources, students from modest backgrounds can excel in the legal profession like Fabiana, especially now that she is helping to blaze a trail for them to follow.”

Pierre-Louis earned her bachelor’s degree in political science from Rutgers University–New Brunswick in 2002.

She will replace Justice Walter Timpone, who will be 70, the mandatory retirement age, in November. However, he is leaving the court early and she is expected to start serving in September, according to Scutari. With Pierre-Louis’ ascension, the court will be equally divided between Republicans and Democrats (3-3) with one independent.   In accordance with state law, after Pierre-Louis serves seven years, lawmakers can consider giving her tenure until age 70.