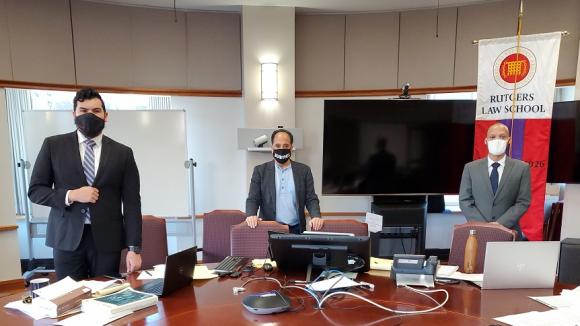 In a recent 9-0 decision, the U.S. Supreme Court protected the rights of social security and disability claimants to give access to the federal court and justice. Until recently, a series of federal appellate court decisions prohibited claimants who had been denied their social security benefits from bringing up issues before a federal court that weren’t first brought up in an informal administrative hearing.

Rutgers Law School Clinical Dean Jon Dubin first brought attention to the unfairness of those court decisions in an article published by the Columbia Law Review nearly 25 years ago. He noted that many people seeking social security benefits do not have a lawyer present at their administrative hearings and are unaware of the complex legal and constitutional issues that may arise in a court argument. In addition, the uniquely short and informal SSA hearings are ill-suited for effectively presenting these issues.

On April 22, the Supreme Court in Carr v. Saul, sided with Dubin’s argument and took into consideration an amicus brief led by Dubin and joined by 55 other law professors from 40 law schools across the United States. Dubin said this latest result will have an immediate impact on people denied their social security and SSI benefits.

“On a human level, the case was about access to justice and to the courts for low-income, disabled, elderly and long-term worn-down workers, including those with severe psychiatric and cognitive challenges, highly limited education and lack of facility in English,” Dubin said. “Nearly 40% of disability claimants lack attorney representation at these hearings which are unusually informal and non-adversarial. If the Social Security Administration’s position had been affirmed, these claimants would have been barred from raising many winning arguments in federal court because they lacked the capacity, assistance or functional opportunity to raise arguments in these formerly informal hearings.”

Dubin, who is the Dean of Clinical Education, overseeing 11 clinics at Rutgers Law, represents such claimants in court and has done so for many years. He said he was inspired to write an article drawing attention to the unfairness of the law in the late 1990s after seeing several circuit courts throw out claimants’ appeals when he worked as a law professor and clinic director in Texas.

He said, in the late 1990s, circuit courts around the U.S. were split on whether to allow claimants the right to bring up new arguments in the SSA’s informal agency appeals process. The U.S. Supreme Court first considered the issue in 2000, in Sims v. Apfel, and issued a split verdict, in a case Dubin and the Rutgers Urban Legal Clinic co-counselled before the high court. Dubin and the clinic drafted the principal brief before the court and moot courted and assisted the arguing attorney who represented a woman in Mississippi who had been denied access to the court to challenge denial of her social security benefits. Though the court ruled on the side of the claimant in Sims, in the ensuing years, Dubin said more circuit courts began to deny appeals based on issues left open in the 2000 Sims (5-4) decision, such as whether issues must be raised at the informal agency hearings (as opposed to informal agency appeals).

Last fall, Dubin and the Rutgers clinic were asked to participate in an amicus brief that would go before the Supreme Court on that open issue in a case involving a complex constitutional issue that was not raised at the hearing.  Dubin sought out his Social Security textbook co-author, Professor Emeritus Frank Bloch at Vanderbilt University School of Law to co-author and help coordinate work with other law faculty on the amicus brief that represented the voices of 54 additional law professors. Rutgers Law students Christian Villatoro RLAW ‘21 and Jaime Portillo RLAW ‘21 assisted in the brief. In April, the Supreme Court unanimously agreed with much of what Dubin had argued all along, as to the issue before the court and reversed two restrictive court of appeals decisions to the contrary.

Dubin said informal administrative hearings are done quickly for nearly a million claimants a year across the U.S., many of whom do not have legal representation. He argued that the hearings are designed to be short and informal, not a hours-long procedure that raises several or complex technical, legal or constitutional issues.

“I hoped it would get to the Supreme Court,” he said. “I thought the issue was important.” He noted that when President Franklin Roosevelt launched the Social Security Act, workers were required to pay into it and were to be protected in the agency process when they needed to draw on their benefits for life support due to old age, and later, when disability was added to the Act. “The Act was designed to provide many opportunities to make sure correct decisions were made in the social security system – because folks are required to pay into the system – and to make sure they’re really protected should the circumstances arise that (they) need the benefits,” Dubin said.