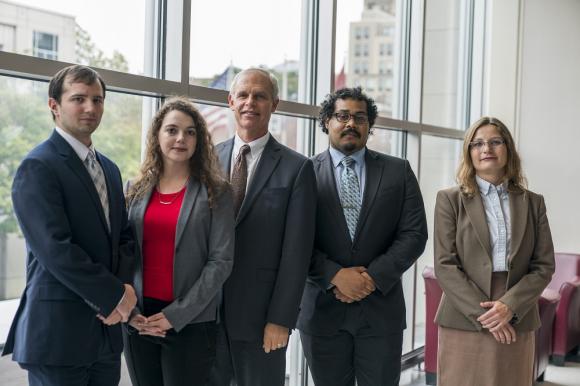 Professor Andrew Rothman, center, standing with some of the Rutgers Law Associates in Newark.

What started out as a groundbreaking experiment in legal education five years ago has exploded into a successful law firm operating across the state that has served almost 800 low and moderate income New Jerseyans.

Today, RLA is a small law firm based on the law school campuses in Newark and Camden. The lawyers are recent law school graduates. The New Jersey Supreme Court has recently ruled that RLA fellows may appear in court as full-fledged lawyers even before admission to the bar. They work full time under the direct supervision and instruction of Rothman at all times. Fellows pay no tuition for the year-long certificate program, and they receive a stipend comparable to what judicial clerks are paid.

RLA clients are typically ineligible for free legal counsel from the Rutgers Law School clinics or pro bono service providers, but also cannot afford a market-rate lawyer. Before RLA was created, these people would typically try to represent themselves without a lawyer, often unsuccessfully. But with the opportunity of hiring an RLA lawyer at $60 per hour, lower-income litigants can have quality representation at an affordable price.  The firm has become quite popular and it is not uncommon to get 200-300 calls a week from people seeking representation.

Besides billing modest fees, RLA has received various grants to provide free legal services for special populations. Most recently, Camden County Correctional Facility (CCCF) his hired RLA to aid people coming out of jail who are recovering from opioid addiction. Rothman said the grant will pay for the work to resolve all kinds of legal issues, such as clearing old warrants, handling landlord/tenant issues, recalculating child support, restoring visitation, and overcoming obstacles to help clients re-integrate in society. “We recognize that the re-entry population has all the same legal needs of the non-re-entry population but with additional issues related to distrust of the legal system,” Rothman said.

The lawyers who participate in the one-year fellowship program say they have gained experience trying cases, taking depositions, and representing clients, giving them marketable skills they would not have had a chance to develop at a large firm.

“From day one you are handed a docket of cases and told this is yours now,” said Ali Y. Ozbek RLAW'15, who joined the RLA in January 2016 and now works at the Passaic County Prosecutor’s Office. “The things I was working on were very varied. You had to learn quickly.” Ozbek said during his one-year fellowship, his cases ranged from consumer fraud to handling an international child custody dispute under the Geneva Convention.

John Boehler RLAW'14, who was an RLA fellow in 2015, said in his first week on the job he appeared in court to represent a grandmother seeking to keep guardianship of her special needs step-grandson. “There was an incredible value in getting to practice,” he said. “The amount of work I got to do on my feet in the courtroom, in conference calls...was more than I have done in my subsequent years of private practice. It covered things I didn’t do in law school.” Boehler’s experience at RLA was a springboard to his current job doing commercial litigation at a private firm in Montville.

Over the last five years, RLA has partnered with local non-profits, including the Newark Community Street Team and CCCF doing re-entry work, and the New Jersey Crime Victims Law Center, representing victims of domestic violence. Other referrals to RLA have come from New Jersey Legal Services and New Jersey Courts, but most clients have simply learned of RLA by turning to Rutgers Law School for help with their legal problems. Rothman estimated the fellows have done 25,000-30,000 hours of work since the program began.

Building on the success of RLA, Rothman said other schools have opened similar programs. Other law schools have sent some graduates to be trained in the RLA program. One current fellow is a graduate of Cornell Law School, and two fellows received their law degrees from the University of Maryland.

Besides learning important legal skills, the attorneys who started at RLA say they got special satisfaction out of working with people who couldn’t otherwise afford legal help. Boehler said, “It can be a great gateway to public interest law. You’re representing clients who truly need your help, and in doing some impactful legal work you can really see the impact on the clients’ lives.”