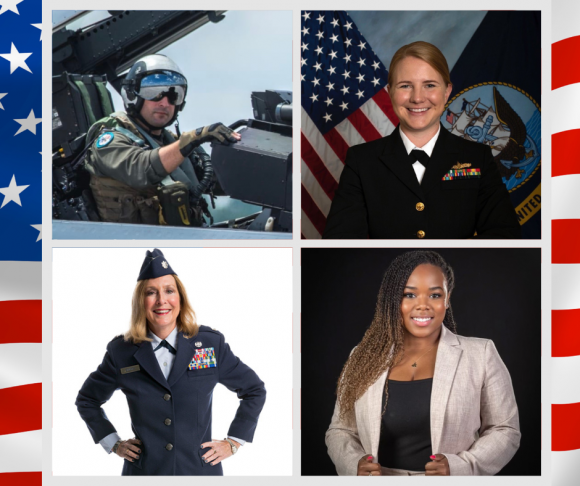 Each Veterans Day, our nation honors those who have served in the U.S. Armed Forces. We join in the celebration with highlights of three Rutgers Law students and one alumna who have served.

It was autumn 2009, and Zach Fini had just begun his senior year at Northern Michigan University. He was also at a crossroads: he could plan to enter the job market upon graduation, or he could follow in the footsteps of his older brother, Jonathan, who was an enlisted sailor in the U.S. Navy. In the end, it was the opportunity to fulfill a childhood dream of flying a plane that finally sealed the deal for Fini. After graduation, he commissioned as an officer in the Navy and was soon flying in the backseat of an EA-18G Growler aircraft, managing the weapons systems, and working to disrupt or suppress enemy radars and communications. “Basically, what I tell people is that I was Goose in Top Gun,” he quips.

Fini served almost 10 years in active duty, including a deployment to the Middle East on the USS Dwight D. Eisenhower in 2016. As he neared the end of his active-duty career, Fini decided to apply to law school and follow in his other brother's footsteps. Matthew Fini graduated from Rutgers in New Brunswick in 2006. This year, Zach is a first-year student at Rutgers Law in Newark but he hasn’t left behind the lessons he learned in the military. “For the past 10 years, I didn’t know my schedule until 10 p.m. the night before,” he says, which equipped him with impeccable time management skills. “Especially now that I know what I’ll be working on far ahead of time, it’s even easier for me to compartmentalize and stay on track,” he adds.

Like many first-year students, the Skillman, New Jersey native is still figuring out what kind of law he ultimately wants to practice. He’s considering corporate and sports law but is keeping an open mind and trying to learn as much as he can without the fear of failure that can keep some students from success. “Going from college to flight school, I was terrified of failing,” he says. “I learned over the years that the only way to improve at something is to fail over and over again—otherwise, you don’t learn. This has really changed my mindset and made me realize that it’s really not the end of the world if something doesn’t go your way.” 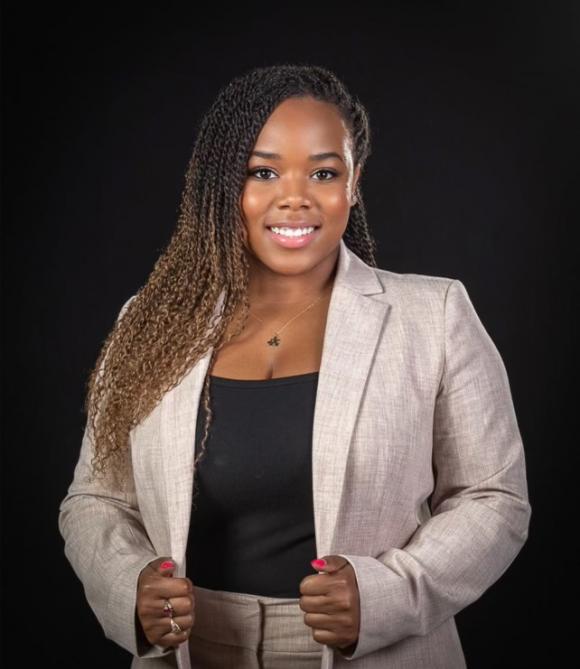 Dashay Carter was born and raised in Newark, New Jersey, and has spent her life giving back to the place she calls home. Her efforts began in 2011 after graduating from Emory University. She says she could have found a job in Atlanta, but it just didn’t feel right. “My Newark community had given so much to me that I felt it was my obligation to return and give back,” she says. “Truthfully, I felt guilty going anywhere else. I didn’t want to be that person who got an opportunity elsewhere and never came back to Newark.”

Carter’s extensive career in Newark began in 2012 when she worked as South Ward Coordinator for Ras Baraka’s mayoral campaign. After his win in 2014, Carter earned her Master of Public Administration degree from Rutgers University-Newark, held a seat on the Newark Public Schools Board of Education, and took a human resources position at the Newark Housing Authority (NHA). Today, she is Chief of Human Resources at NHA.

On the weekends, Carter served in the U.S. Army Reserve. She spent seven years as an aviation operation specialist, acting as the communications liaison between the aircraft and base and, in 2018, accepted a position as human resources specialist. “I learned mental toughness in the Army—everything is a mental game, even carrying an 80-pound bag up a hike during the rain,” she says. “Once you get the mindset that you can do something, you can do it.” Now, she is putting this lesson to the test as a first-year student at Rutgers Law School in Newark.

Carter says she isn’t quite sure what kind of law she ultimately wants to practice, but she does know one thing: she will always prioritize giving back to the Newark community and its families, whether it’s in a salaried position or as a pro bono attorney. “I want to be an example for kids growing up like I did,” she says. “It’s important for kids in Newark to see successful attorneys who look like them, are from an urban area like Newark, and maybe weren’t raised in the best home environment. It says to them, if I can do it, you can do it.” 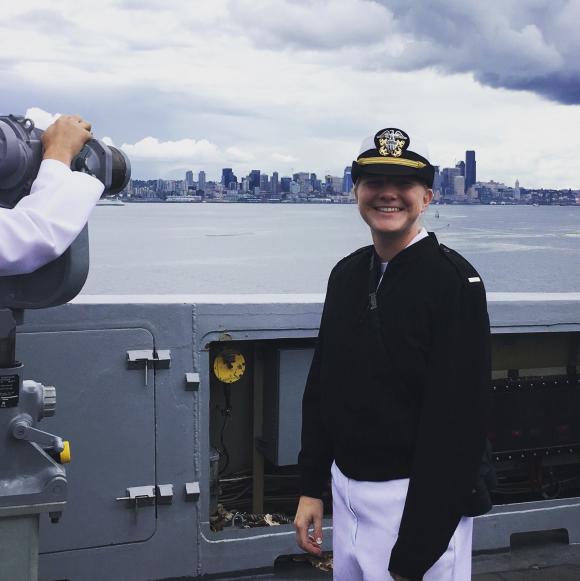 Though she always felt a call to service, Jenn Abbott knew the military was the path for her when she first visited the U.S. Naval Academy in Annapolis, Maryland. “I had the opportunity to visit the campus during my senior year of high school, and I fell in love,” she says. Since graduating in 2010, she served 11 years in active duty, primarily as a surface warfare officer, a role that required she manage the day-to-day operations of 40 sailors and help drive the USS Somerset vessel based out of San Diego. In 2019, she moved to Washington, D.C. where she served in an administrative capacity assisting the Navy’s chief of legislative affairs, acting as a liaison to Congress, and serving as a White House social aide to the President.

Last year, Abbott transitioned to the Navy Reserve so she could attend Rutgers Law School, but it may not be the end of her military career. “I hope someday I’ll come back and serve in the JAG Corps,” she says, referring to the Navy Judge Advocate General's Corps, which provides legal services to military personnel and their families. “My ultimate goal is to work in the federal government in some capacity,” she adds. “I’d love to work in the Department of Veterans Affairs and give back to the organization that has a lot to offer and a lot of people to help.”

As a third-year law student, Abbott is pleased to apply her military training in a whole new way. “The military teaches you how to prioritize tasks and make a plan,” she says. “I’m a big scheduler, so when professors give us our syllabus and assignments for the semester, I enjoy planning down to the hour what I’m going to study on any given day.” Plus, she’s found a supportive community on the Camden campus. “The Rutgers Law community is very veteran-friendly,” she says, noting that many of her peers in law school don’t have the extensive support she’s found at Rutgers. “Transitioning from the military to law school can be filled with red tape, but Rutgers has a well-established network of services and a seasoned team with the answers to almost anything.” 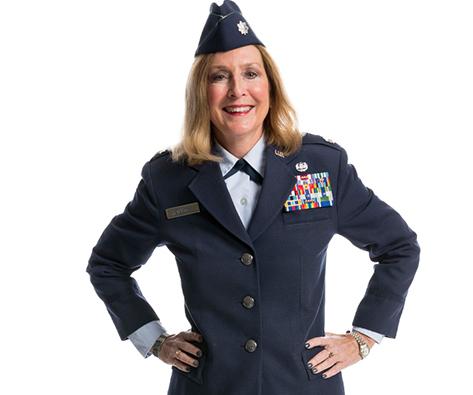 Sally Stenton was serving as a U.S. Air Force Judge Advocate General (JAG) in Afghanistan in 2011 when a gunman massacred eight of her fellow Airmen and a U.S. civilian contractor with whom she worked. She lost close comrades that day, including her best friend. “It was, needless to say, not just the worst day of my life, but the worst of many people’s lives,” she says.

Due to a last-minute change to a mission, Stenton, who had earned a J.D. from Rutgers Law School in Camden in 1990 before beginning her Air Force legal career, was not in her office across the hall from the Afghan Command and Control Center in Kabul where the massacre occurred. “I suffered for a very long time, and I still do, to a certain extent, with survivor guilt,” Stenton says. “I wondered why I survived, and they didn’t.”

When Stenton retired the following year from the Air Force, she found a way to assuage the pain of her loss by helping other veterans. She earned accreditation to represent veterans seeking VA compensation and pension benefits from the U.S. Department of Veterans Affairs. Since then, she has represented hundreds of veterans with claims and appeals. In 2021 alone, she helped 75 of her veteran clients win more than $1 million in awards. “I found my purpose, my passion in life,” she says. “Over the eight years that I’ve been doing this, I get the feedback that I’ve helped so many veterans, and I love it. I know that I have changed veterans’ lives.”