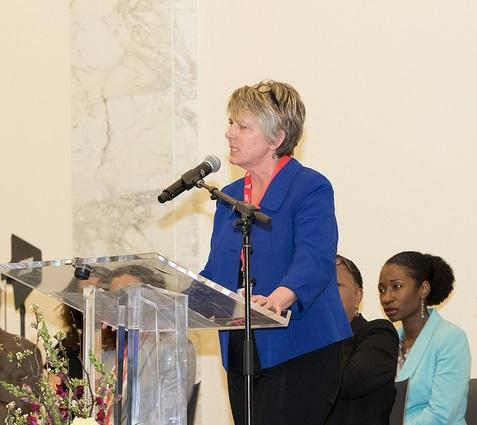 Two Rutgers Law clinics filed amicus briefs arguing that requiring juvenile sex offenders to register for the rest of their lives violated the right to due process under the New Jersey State Constitution. In late April, the state Supreme Court agreed, striking down that aspect of Megan’s Law as unconstitutional.

Both the Rutgers Criminal and Youth Justice Clinic in Newark and the Children’s Justice Clinic in Camden, shared in last week’s victory. Professor Sandra Simkins and her students had submitted an amicus brief when the case was before the Appellate Division and Professor Laura Cohen and her students co-wrote a Supreme Court amicus brief on behalf of the of the ACLU of New Jersey, Advocates for Children of New Jersey, and the Northeast Juvenile Defender Center.  Cohen also argued the case in the Supreme Court last fall.

“We know the harms of registration are profound and numerous, and that this is a failed public policy, a dangerous public policy that harms children,” Cohen told NJ Spotlight, which wrote about the decision. “We need to rethink this.”

“The reason this argument is so important, all the research documents that Megan’s Law registration is very harmful to kids,” said Simkins. “Research Indicates that children who commit sex offenses have very low recidivism rates.”

The clinics argued on behalf of the client C.K. who was convicted at age 15. As a result of the decision, all youth adjudicated for sex offenses can petition for removal from the registry after 15 years. Whether they ultimately are removed is a matter of judicial discretion and depends on a number of factors.

The Court's sweeping opinion embraces the clinics' central argument: mandatory imposition of lifetime registration and notification (SORN) requirements on young people runs afoul of the U.S. Supreme Court's and N.J. Supreme Court's still-evolving jurisprudence of youth. Juvenile SORN, in contrast, imposes what is essentially a lifelong adult sanction on children, without regard for their developmental status, lesser culpability, or elevated privacy and procedural rights. It causes devastating, lifelong harm to youth on registries, including increased rates of suicide, homelessness, social ostracization, economic hardship, and disruption of family relationships.

And, because the overwhelming majority of youth adjudicated of sex offenses do not recidivate and are not predatory, registration does not promote and even threatens public safety. Such a system does not comport with the legal or scientific consensus on child development, runs contrary to state and federal constitutional principles, and undermines the core rehabilitative purposes of the juvenile court.

Simkins said, “The clinics decided to get involved because it really was an important issue for the kids of New Jersey, and to apply what we now know about adolescent development.”

Cohen, whose clinic has represented incarcerated youth in New Jersey for the last decade, said she was able to bring to the Court’s attention the stories of her clinical clients who were on the registry.  “The certification we submitted to Supreme Court told those client stories,” she said. “Oral argument focused on those lived experiences of these youth.”

For instance, juveniles on the registry cannot return to public housing, or to their high schools, they may not be allowed to associate with younger siblings and they can’t live at dormitories at college. Many have to report to a police station on a regular basis. As a result, they may become homeless and have higher incidences of suicidal behavior and are more likely to experience poverty.

“Placement on the registry is extraordinarily harmful and cruel and serves no legitimate public safety purpose. Youth who are adjudicated for sex offenses reoffend at lowest rate of anyone in the system, below 3 percent. In addition to that, they’re not predatory. These laws were passed in response to horrific crimes against children, committed by adults who were predatory offenders. They should never have been extended to adolescents.” said Cohen.

The clinics’ relationships with their clients informed every aspect of their work on this case, she said.

Cohen said she hoped this victory could signal other changes down the line. The certified question in C.K. involved only mandatory lifetime registration without the possibility of removal from the registry, and the Court's decision is limited to this issue. The opinion is, however, the first time the Court has acknowledged the profound harms associated with juvenile registration since the enactment of Megan's Law over 20 years ago or determined that those harms are of constitutional dimension. It thus leaves open the door to a broader challenge to juvenile registration in the future.