Rutgers Law co-dean on fighting racial injustice: 'We have to be able to be uncomfortable' 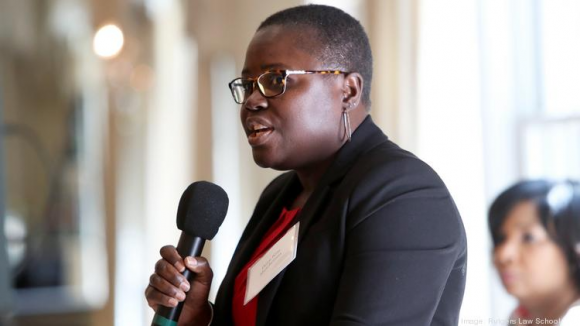 Kimberly Mutcherson is in a unique position. The bioethics and health law scholar is co-dean of Rutgers Law School in Camden and also a black, LGBTQ woman, with her appointment at the beginning of the year representing a slew of firsts for the school.

In the wake of the George Floyd’s killing by Minneapolis police and widespread protests against police brutality, Mutcherson sat down to write an email to students and thought about how to balance those two realities.

“One of the challenges of being in that role is how do you figure out how to meet the demand, in this sort of objective sense, of what it is a law school dean does, but also be the person who I am,” she said. “That’s been really important to me.”

This portion of the article was reprinted with permission from the Philadelphia Business Journal. You can read the entire article here.

Below is Dean Mutcherson's full email to the law school.

As a professor, I’ve frequently advised students to be their whole selves in the employment process because they don’t want to work at a place that cannot accept who they are as a complete person. It is in that spirit that I am writing this unique Sunday email to our community so soon after declaring that you wouldn’t be hearing from me in this way for a while. I won’t urge students to bring their whole selves to their work if I will not do the same. So know that I am writing this message as the Dean of this Law School who is a Black woman. I write as the mother of a fourteen-year-old boy and a twelve-tear-old girl whose precious brown faces are threatening to others. I write as a person who, like so many Black people who work or learn in predominantly white environments, has figured out how to pick my battles, how to play a long game, how to manage from below, and how to forge a community outside of work that allows me to process on the days when who I am makes the professional role that I assume every day especially heavy. And heaviness has defined this role for me from the start.

These last few months capped off by these last few weeks have been particularly devastating. The sense of foreboding and fear occasioned by a pandemic the likes of which almost no person still alive has ever experienced, has now merged with a painful reminder that even when we are in unchartered waters, America remains the same is it ever was. It somehow seems fitting, though tragic, that we are in the midst of protest over the unjust killings of Black people on the same day that marks the Tulsa Massacre of 1921 in which a white mob terrorized and destroyed the Black community of Greenwood. Racial unrest is firmly entrenched in our American past and present, and in these past weeks, the news has offered a cacophony of heartbreaking images and stories. Breonna Taylor, a Black woman and an EMT in Kentucky, shot dead in her home by police officers executing a no-knock warrant and wearing no body cams. Ahmaud Arbery, an unarmed Black man, killed on video by two white men purporting to carry out a citizen’s arrest. George Floyd, a Black man killed by police in the course of an arrest for alleged forgery. The power of cell phone video means that we all watched in horror as a police officer kneeled on a handcuffed man’s neck for nine-minutes until he went limp, ignoring all signs that Mr. Floyd was in extreme distress. We’ve also seen the video of Amy Cooper, a white woman now made famous for her 911 call feigning terror at being attacked by a Black man. That Black man, Chris Cooper (no relation), was guilty of nothing more than asking her to leash her dog in an area of Central Park in which all dogs are required to be leashed. Ms. Cooper’s instinct to weaponize the police showed her own callousness and disregard for Mr. Cooper’s safety.

In wake of George Floyd’s killing at the hands of police officers, our cities are burning. I condemn the violence and destruction of property, but recognize that, in the words of Dr. Martin Luther King Jr., “A riot is the language of the unheard.” This is an observation, not a justification. Our own country’s origins are rooted in protests and property damage, so we know that protest is as American as apple pie. That people are taking to the streets in large numbers during a pandemic that has had us all avoiding physical proximity speaks volumes about the level of outrage that the events of the recent past have rightfully sparked. Every protestor with a smartphone can document what is happening in the streets of our cities. Some subset of protestors have clashed with police, looted stores, and burned buildings. There are also reports of unprovoked attacks on peaceful protestors by law enforcement, arrests and physical attacks on journalists, and police cars being driven through crowds. At the same time, though, I am heartened by the police chiefs who have joined the protestors including in Ferguson, Miami, and Santa Cruz. In Camden, police officers were filmed marching alongside protestors seeking justice and accountability for George Floyd’s killing. Multiple police chiefs around the country have spoken out to condemn the actions of the officers involved in Mr. Floyd’s arrest and killing. The call for justice comes from many places, including from highest ranks of law enforcement.

Even as we all hope for justice and peace, the sense of helplessness and hopelessness that comes from watching the constant stream of news reports can be difficult to manage. When I see what happened to George Floyd, I don’t experience that simply as a bystander to someone else’s pain and loss. I experience it as a mother of a Black son, the daughter of a Black father, and the aunt of a Black nephew. I think about the times I’ve told my son not to wear the hood on his hoodie and not to carry his cell phone in his hand if he is out after dark. Even in our progressive small town in New Jersey, I worry for his safety. And, as my daughter gets older, I will have the same conversations with her because gender has not protected Black women from police violence as we know from the deaths of Sandra Bland and so many others. Despite the progress that our country has made in the centuries since the first Africans were brought here in chains, Black bodies continue to be at risk.

It is not enough to lament what we’re seeing. We must find hope in the midst of chaos and that is what I’ve been doing. I cling to some fundamental beliefs to help me move forward with hope during these moments. I believe that anger can be righteous and eloquent. I believe that we all have a role to play in making America’s future better than its past. I believe that ignoring institutional racism and wide spread societal inequities gets us nowhere. I believe that we must accept that existing societal structures benefit the few at the expense of the many. I believe that declaring that one is not racist is not the same as engaging in work that is anti-racist. I believe that talking about race, even when it is uncomfortable to do so, is necessary for progress. I believe that my children deserve to live in a better world and not raise their children to have the same fears that I have for them. And, most of all, I have to believe that a better world is possible. I don’t know that I will live in it, but I know that the law and lawyers will be an integral part of making that world real. I know that the skills our graduates take into the world are the basis for lasting social change. And I know that the work required to get us to that better place demands a collective effort from everyone who also wants a healed world for themselves and their children.

In 1962 in his book, The Fire Next Time, James Baldwin wrote, “Everything now, we must assume, is in our hands; we have no right to assume otherwise. If we . . . do not falter in our duty now, we may be able, handful that we are, to end the racial nightmare, and achieve our country, and change the history of the world.” I am eager to work with all of you to be the change that the world requires.