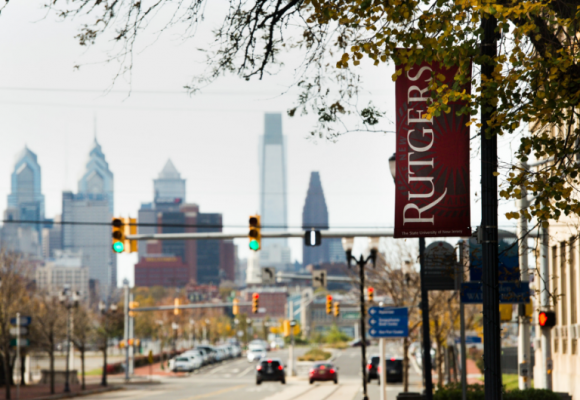 "Every day, Rutgers University–Camden works to advance the communities of southern New Jersey and the region," said Chancellor Phoebe A. Haddon in a statement to the community.

"We are delighted the Chancellor will recognize Claire and Nikia, both second-year law students, strong leaders, women of color, and members of the Law School’s Social Justice Scholars Program," said Jill Friedman. "They are leaders who shoulder vast responsibilities and inspire others."

Clark serves as a panelist member on the Philadelphia District Attorney's Office Youth Aid Panel, meeting twice a month with the board to hear cases and construct contracts for youth that serve as an alternative to court. During her first year of law school, Clark participated in the Street Law Pro Bono Project, teaching Camden kids about the law in their lives, and in the Mediation Pro Bono Project, helping Camden community members resolve conflicts without resort to litigation. In her role as BLSA President, Clark organized a book bag drive and Safe Halloween for local children, two events for Black history month, and a program about the war on drugs and opioids.

Newsome volunteered through the Rutgers Law Volunteer Income Tax Preparation pro bono project, which serves low-income members of the Camden community, and the court-connected Mediation Pro Bono Project. She has also volunteered to organize criminal record expungement clinics for members of the Camden community with Professor Meredith Schalick and multiple service events to help immigrants, including DACA and power of attorney events with Professor Joanne Gottesman. In addition, she assumed a pivotal leadership role in recruiting and selecting Social Justice Scholars from the incoming law class.

Additionally, David Roeber RLAW’09, counsel at Stradley Ronon, was recognized for his deep commitment to providing legal services to low-income families and individuals in Camden and South Jersey.  He serves as the lead attorney for the UrbanPromise Legal Clinic in Camden and helped establish the Volunteer UP Legal Clinic, a joint initiative between UrbanPromise and Volunteers of America Delaware Valley providing much-needed legal assistance to economically disadvantaged clients of both non-profit organizations to help remove barriers to their success. He provided legal services through Professor Schalick’s Child and Family Advocacy Clinic during his time as a student at Rutgers Law.

The 2019 Rutgers Law-affiliated recipients of the Rutgers–Camden Chancellor’s Awards for Civic Engagement are:

I Dare to Care Association (ID2C)

The accomplishments of these honorees will be celebrated during a special reception at Rutgers–Camden on Tuesday, April 23.