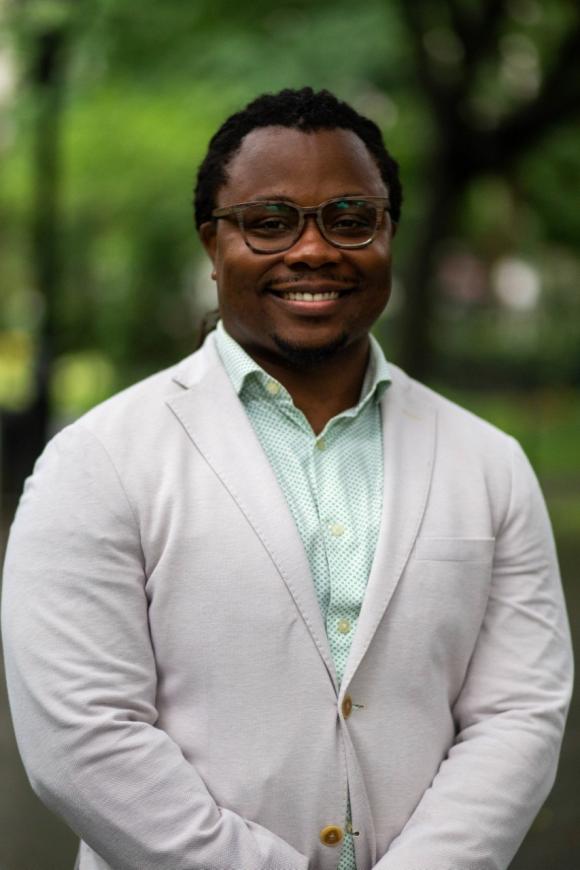 Emahunn Campbell RLAW '21 has been chosen as the first Rutgers Law graduate to be awarded a Karpatkin Fellowship from the ACLU.

Emahunn Campbell RLAW ’21 is the first Rutgers Law School graduate to be awarded the prestigious Karpatkin Fellowship from the ACLU, which will allow him to serve in a yearlong fellowship working in the ACLU’s Racial Justice Program.

Campbell was chosen as this year’s recipient out of over 100 applicants.

The program challenges racial discrimination and other practices and policies that have a direct or disparate impact on communities of color and has a particular emphasis on education, criminal justice, and economic justice issues.

ReNika Moore, Director of the Racial Justice Program said, “The Karpatkin Fellows have made immeasurable contributions to the ACLU’s work over the past four decades, and have gone on to be national leaders in the in the struggle for civil rights and civil liberties. We are thrilled to welcome Emahunn to the Racial Justice Program as a Karpatkin Fellow, and congratulate him on this milestone in his career.”

Campbell, who has been clerking for Appellate Court Judge Thomas Sumners, will start the fellowship in September 2022 at the ACLU’s New York City national offices. Clinical Dean Jon Dubin also was a Karpatkin Fellow in the 1980s.

"I am thrilled to join the country's premier defender of civil liberties as a Karpatkin fellow.  So many attorneys I admire, from Deborah Archer - the organization's first Black president - to Dean Jon Dubin, have held this prestigious fellowship, so it is an honor to follow in their enormous footsteps,” said Campbell.  “I look forward to drafting briefs, taking part in depositions, working with clients, and engaging generally in impact litigation to address systemic racism and structural inequities across the country.”

During his second year of law school, Campbell was a Kinoy-Stavis fellow, working in the Constitutional Rights Clinic. He also was a student in the Civil Justice Clinic, where he worked on a federal housing discrimination case, among other cases. For two years, he was a Street Law instructor and a legal observer at demonstrations in the tri-state area.

Campbell remarked on the tumultuousness of the country, during his years in law school. “There were a number of internal and external matters that we faced as a law-school community. From issues regarding race at the law school; the murders of Ahmaud Arbery, Breonna Taylor, Tony McDade, and George Floyd; to the COVID-19 pandemic, we have been through so much.”

Even before he came to law school, Campbell, a former high school teacher and professor with a PhD in Afro-American Studies, had a history of working towards racial justice. He had previously worked to free a wrongfully-incarcerated man and said he was inspired to come to Rutgers Law after he saw Professor Elise Boddie, then working as the litigation director for the NAACP Legal Defense and Educational Fund, Inc., on a television show called Democracy Now and emailed her about her work.

According to the ACLU, the Marvin M. Karpatkin Fellowship was established by the ACLU Board of Directors more than 40 years ago in memory of Marvin M. Karpatkin, the late General Counsel of the American Civil Liberties Union, who died in January 1975, at the age of 48. Mr. Karpatkin was one of the ACLU's most active attorneys during the 1960s and early 1970s. His contributions to civil liberties were a core part of his life, and he left a special mark in the areas of selective service and military law.

Since the fellowship launched in 1975, the Karpatkin Fellows have been an integral and critical part of the ACLU’s work, and have contributed to innumerous important racial justice and civil rights and liberties cases. Karpatkin Fellows have gone on to make incredible contributions to the public interest law, becoming leaders at the country’s foremost public interest legal organizations, government agencies, and public defender offices. Others have gone on to become clinical professors at law schools across the country, while others serve as judges.

Campbell added that he was attracted to Rutgers’ reputation as the "People's Electric Law School," and its roots in the Civil Rights Movement. “I could not think of a better place to learn how to use the law to support marginalized and vulnerable communities.”

He said, “From an early age, I have dreamed of doing this work and it feels surreal to begin my legal career with the ACLU.  I cannot thank my mentors enough for their support, including (Professors) Elise Boddie, Alexis Karteron, Rachel Godsil, and (former Co-Dean) David Lopez."