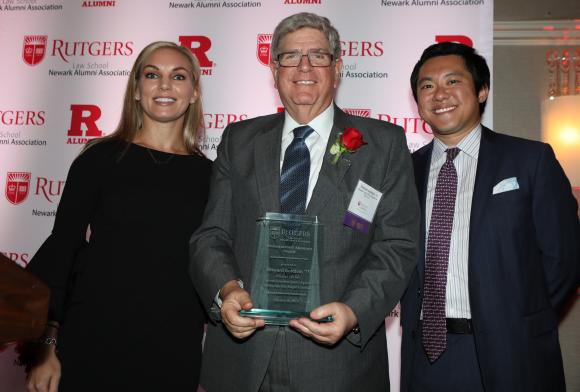 Honored at the event were: Camelia M. Valdes RLAW ’96, the Passaic County Prosecutor, who was given The Fannie Bear Besser Award for Public Service; Shepard Goldfein RLAW ’75, of Counsel at Skadden, Arps, Slate, Meagher & Flom LLP., who was honored with the Distinguished Alumnus Award; and Maureen Ruane RLAW ’93, a former federal prosecutor and healthcare lawyer, who was recognized with the Distinguished Alumna Award.

Adam Conrad RLAW ’20, was lauded with The Fannie Bear Besser Award for Public Service. Conrad is the Executive Editor of the Rutgers University Law Review, a member of the Student Bar Association, the LGBTQ Caucus, Minority Student Program, and National Lawyers Guild.

Julie Minicozzi RLAW ’20, received the Alumni Student Recognition Award. She is the Editor-in-Chief of the Rutgers University Law Review, has a cumulative grade point average of 3.835 and will be clerking for Hon. Stuart Rabner, Chief Justice of the New Jersey Supreme Court after graduation.

Goldfein said that he owes “a great gratitude” for the education he received at Rutgers Law School, which propelled him into a successful career. He contrasted Rutgers’ support for protestors of the Vietnam War with the University of Chicago, at which he attended graduate school, where protestors were suspended. Goldfein said Rutgers, “had a dedication to human dignity for all,” which inspired him to attend law school here.

Ruane could not attend the ceremony, but sent a video thank you that was shown at the event.

Valdes talked about her improbable rise to become the first Latina county prosecutor in the state of New Jersey and her time at the U.S. Attorney’s office. “I was Dominican, poor, and from Newark,” she said. “I’m not supposed to be standing here.” Valdes said she was taught a sense of “passion and urgency” in law school and said her goal was to “advocate for the voiceless.” Her remarks drew a standing ovation.

In addition to the dinner and awards ceremony, a silent auction at the gala raised money for student scholarships.