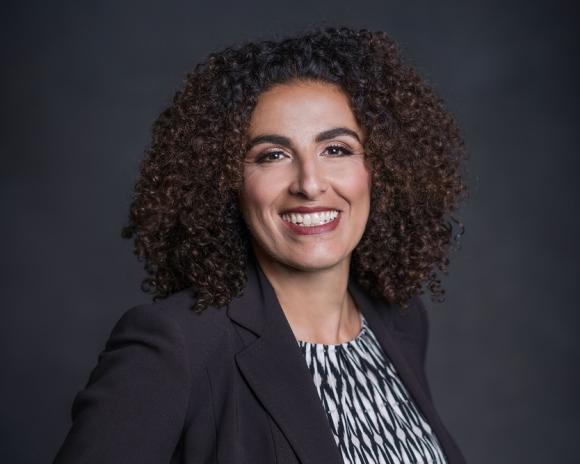 Rutgers Law School Professor Sahar Aziz is a Chancellor’s Social Justice Scholar and  an expert in civil rights and the Middle East. Her scholarship looks at the intersections of national security, race, and civil rights and the adverse impact of national security policies on racial, ethnic, and religious minorities in the U.S. She is also the founding director of the interdisciplinary Rutgers Center for Security, Race, and Rights. She is the author of a new book: The Racial Muslim: When Racism Quashes Religious Freedom. Recently, she was selected as Soros Equality Fellow by The Open Society Foundations, and will use her fellowship to support a diverse set of academics and advocates working to better understand and combat racialized national security narratives that disproportionately impact communities of color.

Having worked as an advocate defending the civil rights of Muslims since 2001, I witnessed firsthand systemic Islamophobia in all aspects of American society.  Ranging from state national security practices to private discrimination at workplaces, schools, and the public square, suspecting Muslims of being prone to terrorism was the norm. I observed that experiences of Muslims in the post-9/11 era is a type and degree of profiling and targeting more closely resembling the racial discrimination historically experienced by African American, Native American, and Asian American communities (of all faiths).

Although Muslim identity is not a race in any phenotypical sense, they are being treated as a race, and more specifically, a suspect race, rather than as a religious minority to be protected from persecution. For that reason, government officials and members of the public—who may in fact believe in religious freedom norms—do not view targeting Muslims in national security and immigration practices as a threat to religious freedom.

Herein lies the genesis of this book.

Is our stated commitment to religious freedom meaningful? Does it apply equally to all faith communities? If so, then how can we explain the systematic subordination of Muslim communities, including physical attacks on and surveillance of their houses of worship, under the guise of national security? The answers, I believe, lies in the racialization of a minority religious group—a process with a protracted and checkered history in the United States.  The Racial Muslim compares the discrimination experienced by Jews, Catholics, and Mormons in the early twentieth century with anti-Muslim discrimination in the decades before and after September 11, 2001 to demonstrate that religious freedom has always been circumscribed by the race of congregants.

Who is the audience for this book?

As a law professor, part of my responsibility is to teach my students how law can be weaponized to perpetuate rather than stop injustice.  Individual rights are facially applicable to all persons or citizens.  In practice, however, minority communities do not receive equal protection of such rights as members of majority groups.  The Racial Muslim thus interrogates how and why a country where religious freedom is a founding principle in law and societal norms produces such overt prejudice and discrimination against Muslims.

How does the critical mass of Americans in the twenty-first century that holds unfavorable views of Muslims reconcile their mistreatment with the nation’s (and their own) commitments to religious freedom? I proffer that the explanation lies in how racism intersects with religion to racialize a religion’s followers and consequently exclude them from the panoply of religious freedom protections.  Put simply, racialization causes a faith community’s religious freedoms to be circumscribed or denied altogether.

Why is this book relevant now?

The United States is currently in the throes of multiple culture wars centered on race and religion.   A woman’s right to abortion, same-sex marriage, and mandates to provide contraception in health insurance policies have triggered heated debates about the limits of religious freedom.  Concurrently, a seismic anti-racism movement is attempting to upend deeply entrenched systems of inequality that disproportionately harm African American, Native American, Latinx, and Asian American communities.  The experiences of Muslims are an important component of this broader conversation about race and religious freedom.

The Racial Muslim contributes to a broader conversation on America’s shifting national identity as it approaches a period when no one race will be a numerical majority.   It offers insights toward understand why religious freedom has not protected Muslims from the most egregious violations of their civil rights and liberties – due to both historical and contemporary factors.

What do you hope readers take away from it?

The Racial Muslim demonstrates that being Muslim currently circumscribes access to the privileges of first-class citizenship, including the panoply of religious freedom rights.  For the past two decades, Muslims have faced the brunt of that reality. Their experiences evince what African Americans and Native Americans already know: religious freedom is not, nor has it ever been, equally available to all faith communities in the United States.  This book is my humble attempt to equip scholars, advocates, and policy makers with a deeper understanding of why a religious minority faces such blatant discrimination in a nation that prides itself on, and legally privileges, religious freedom.

When we acknowledge the disconnect between our ideals and our practices, only then can we fulfill our aspirations for a pluralistic and more inclusive American society.

The book is available online at the University of California Press  or Amazon.