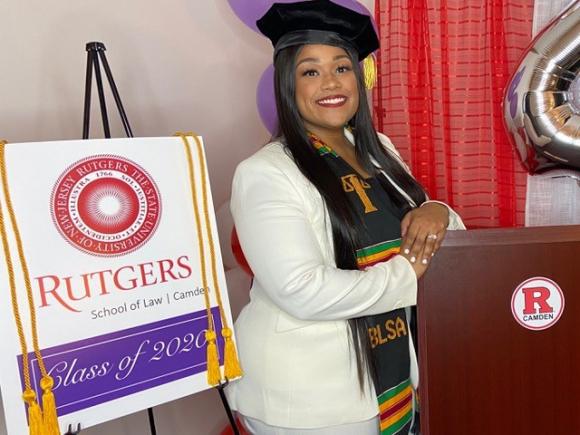 Once, a defendant in juvenile court, Carmen Day graduated law school with honors and is now an associate at a law firm.

Through grit and perseverance, Carmen Day overcame hurdles to become an attorney.

As a teenager, Day pleaded with a Camden judge to reduce her probation sentence for a mistake she made, vowing to the judge that she would make a better life for herself, and that he might one day see her as a lawyer in his courtroom.

“I have always had a passion for justice and equality,” says Day, a Camden native. “I believe I was destined to be a lawyer.”

Day took part in the commencement ceremonies in May, after graduating from Rutgers Law School in Camden in December 2019, and is now an associate attorney at the Brown and Connery law firm in Westmont.

In 2006, Day was 17 years old when she appeared in juvenile court for a plea agreement that could have resulted in 18 months of probation. The judge shortened the sentence to six months.

She went on to attend Camden County College, but twice dropped out. She earned her associate’s degree in 2014, and then completed her bachelor’s degree at Rutgers University‒Camden in 2016, while working full-time at a mortgage company and operating a store that sells hair extensions.

While attending Rutgers Law School in Camden, she juggled work, her courses, and responsibilities at home with her husband and two young daughters.

“When I felt overwhelmed and discouraged, I kept reminding myself that my current struggles were only temporary and that I was going to be a lawyer, no matter what it took,” says Day, a resident of Erial. “The world can fall down around me, and I’m still not stopping.”

Through the support of advisors at Rutgers Law School, including Sandra Simpkins, the director of the Children’s Justice Clinic, and Professor Katie Eyer, Day excelled, graduating with honors.

By participating in the Children’s Justice Clinic, Day had the opportunity to work as a juvenile defense attorney to represent children in criminal cases. In the two aggravated assault cases she handled, she achieved favorable results for her clients.

“Having gone through the juvenile system myself, I was and continue to be extremely passionate about helping young people turn their lives around, just as I have,” Day

Day often speaks at area schools and community groups, sharing how she turned her life around and how her persistence and work ethic led her to where she is today.

In Day’s second year of law school, she finally had an opportunity to meet up with the judge who gave her a chance a dozen years ago. Day was among a group of students observing proceedings in Superior Court Judge Charles Dortch’s courtroom in Camden. After the class met with the judge, she asked to meet with him privately, to inform him that she kept her promise.“

Being able to update Judge Dortch last year meant the world to me,” says Day. “It was so important for me to show him that his compassion in the courtroom played such a huge role in restoring my own faith in the law, and helped inspire me to continue to fight for my dreams of becoming a lawyer. As a Black judge, I know he overcame great adversity to be in such a powerful position, but that he also had great opportunity. He could understand and relate to my position – a young person of color, fighting against the odds to achieve a dream and just needing an opportunity.”