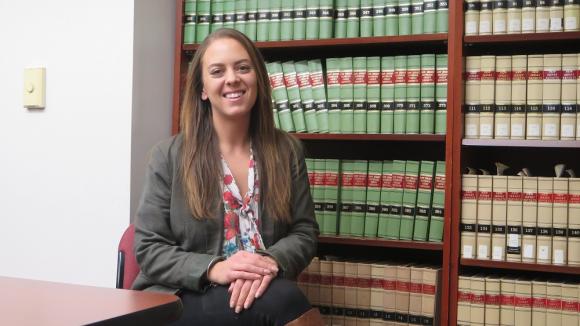 Pina Cirillo is an attorney at Rutgers Law School who is working with detained immigrants as part of a pilot program administered by the state of New Jersey.

Rutgers Law School is part of a pilot program administered by the state of New Jersey to provide legal representation to low-income immigrants who are in detention and who are facing possible deportation.

Rutgers is one of four legal partners of the Detention and Deportation Defense Initiative, including Legal Services of New Jersey, American Friends Service Committee, and Seton Hall Law School. Attorney Pina Cirillo, who works with the Immigrant Rights Clinic at Rutgers Law, was hired in January as part of the pilot program and already has started meeting with and representing clients in detention.

Cirillo said her clients – some of whom are legal green card holders – were most often left with no other option than to represent themselves in court with no legal training. She pointed out that in criminal court, a defendant is entitled to a public defender, but in immigration court, no such right exists.

The overall mission of the new program is “to help New Jersey’s detained immigrant population obtain free, high quality representation” she said, adding that her clients are detained at the Essex County Jail or the Elizabeth Detention Center. She said her clients, so far, range from long-time legal residents of New Jersey to recent arrivals fleeing persecution in Central America.

“I’m really excited about the project,” she said. Cirillo, who graduated in 2015 from Rutgers Law School, spent two years as a clerk for the immigration court and said she’s seeing the other side of immigration court now that she’s representing clients.

Clients with no legal training struggle to represent themselves adequately, whether it is having to fill out complicated legal paperwork, to preparing for court appearances, she noted. Many also have the additional hardship of not being fluent in English.

According to the initiative’s description “the New Jersey pilot program will show the value of providing legal representation for all, so that proceedings are fair and no one is deported simply because they cannot afford to hire a lawyer.”

Cirillo works under the supervision of Professor Anju Gupta, Director of the Immigrant Rights Clinic.

“We’re thrilled to have Pina, an alumnus of the clinic, back with us for this important project. The funding from the Governor is an important step in ensuring that all of New Jersey’s detained immigrants get the representation they deserve. We hope this is only the beginning,” Gupta said.