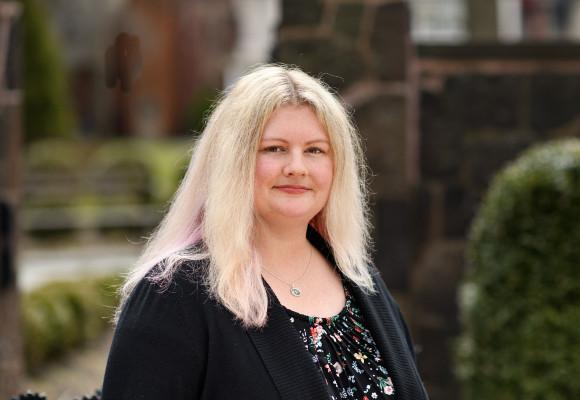 Dawn Ericksen RLAW '22 overcame drug addiction and homelessness and began a new chapter that has led her to become a lawyer.

By Jeanne Leong
After overcoming years of personal struggles, Rutgers Law School student Dawn Ericksen is now living what she calls her “second life,” and is preparing for a career in public interest law.

“I’ve had two lives at this point, and this one is infinitely better,” says Ericksen, a rising second-year student at Rutgers Law School in Camden. “I spent a lot of years without any power or choice,” she says. “My life was a mess. I didn’t have the ability to advocate for myself, to keep myself safe, or to ask for respect.”

In her first year at Rutgers Law, Ericksen participated in the American Constitution Society; If/When/How, an organization focusing on reproductive justice; and the Street Law Project, which takes Rutgers Law into the community to teach area residents about legal issues.

Ericksen is currently involved with the Landlord/Tenant Rights COVID-19 project. As COVID-19 cases began to soar in the region in March, the Rutgers–Camden law school quickly created a pro bono opportunity for students to work with the American Civil Liberties Union to help inform landlords and tenants of new state rules regarding issues such as evictions and mortgage payments during the pandemic. Rutgers Law students are creating a frequently asked questions (FAQ) sheet to provide to landlords and tenants, and distributing the FAQ sheets to organizations throughout New Jersey.

Ericksen is a volunteer with NJ Aid for Animals, an animal advocacy group in Camden; the Adam O'Brien Foundation, which helps addicts and their families find resources to recover; and South Jersey Mutual Aid Network, which helps people in need access food, health care and social services.

Ericksen was looking forward to a summer internship at the New Jersey Division of Law in June, but the agency has canceled all internships due to the coronavirus pandemic. Concerned that not having an internship after her first year in law school would harm her future career, she reached out to Louie Thompson, dean of student affairs; Jill Friedman, associate dean for pro bono and public interest; and Rebekah Verona, assistant dean in the Rutgers Law Career Development Center, for advice and moral support.

“I was especially concerned because I worried employers would immediately disqualify me from consideration without a rising 2L summer internship,” Ericksen explains. Verona assured Ericksen that she was not alone in this situation, and it should not affect her future job prospects. “I went from extreme anxiety to acceptance of the situation within a day,” Ericksen says.

She pivoted quickly and, within a few days, Ericksen developed new plans. She will be taking summer classes at Rutgers Law School and participating in pro bono projects.

Ericksen’s path to law school began in 2014, after she achieved sobriety after leaving a methadone program. After nearly 15 years struggling with her addiction, she began to turn her life around.

She mended relationships with her family. “My parents would not even speak to me at one time,” says Ericksen. “But today we have a close relationship. I also have a wonderful and supportive husband, who encouraged me to get sober.”

She returned to Burlington County College to complete an associate’s degree she started after she graduated from high school in 1999.

“I had a lot of wreckage from my past to clear out,” says Ericksen. During the time she was addicted to heroin, she “experienced street life in the harshest terms.” She had a criminal record that was later expunged. She endured periods of homelessness, begged for change on the streets of Camden, and ate food that she retrieved from trashcans. She suffered overdoses and was revived.

“I hated it all, but I didn’t question it,” Ericksen says. ”These were normal things and simply part of being a drug addict. I was trapped and didn’t think I could ever get out.”

While working as a pet groomer at an animal hospital in Mount Holly, Ericksen continued her education at Rutgers University–Camden, where she completed her bachelor’s degree in business in 2018.

“When I decided I wanted to become an attorney, I realized this would be more than just a career for me,” says Ericksen. “This would be my way of making amends for my past and helping others build better lives.”

For many years, too ashamed to let anyone know about her previous life, Ericksen kept her past to herself, but in the personal statement portion of her application to Rutgers Law School in 2018, she shared the story of her “first life.”

Today, she openly talks about her past, hoping to inspire others.

“Now that I am clean, I have not forgotten those feelings of powerlessness,” Ericksen says. “I want to help others who feel that way. Powerlessness comes from many sources: poverty, lack of education, racism, classism, illness. I want to remedy these sources of inequity.”