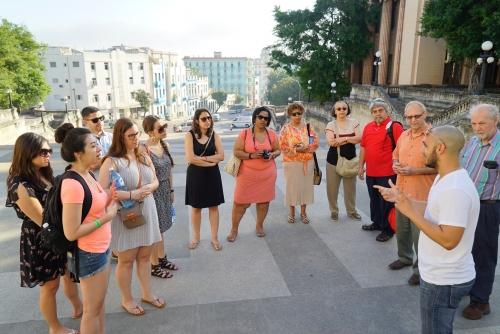 Students, professors and alumni from Rutgers Law School visited Havana, Cuba this spring, in a visit led by Professor Charles Auffant, of  the Community and Transactional Lawyering Clinic.

While in Cuba, the group attended lectures on the Cuban legal system hosted by the National Union of Cuban Jurists.  They met lawyers, judges and law professors, visited the law school at the University of Havana and compared the legal system in the United States to the one in Cuba.

They discussed the Cuban penal code, court procedures and compared the Civil law system, used in Louisiana,  Puerto Rico and  Cuba, to the Common Law system, of used in most of  the United States.

“Unlike our system, trials are held before a panel of three judges composed of two law graduates trained as judges and one lay judge,” however there are no juries,” explained Megan Linares, a 3L who hopes to become a federal prosecutor one day.

Linares went on the trip with her father, who fled Cuba after the revolution. “For the first time in 50 years the government is admitting to a group of Americans that ‘there are still changes to be made,’” she said. “This acknowledgement suggests that Cuba is perhaps ready to change, not to become Americanized but to make changes that benefit the Cuban people and encourage the United States to engage in trade and relations with the country.”

Jason Perez, a 3L evening student, said he noticed a contrast that Americans are strong defenders of their First Amendment rights, particularly free speech, a view not shared by the Cuban people or the Cuban government. “They offer their citizens free health care and free education rather than freedom of speech,” he noted.

Perez said the trip also challenged his biases of Cuba. “Most Americans think all or most Cubans want to leave Cuba. However, Cubans are extremely patriotic and love their country. . . Another thing I was surprised about is that they don’t want to come to the United States because they fear our capitalist economy. They think Americans are fetishistic about working all of the time and they don’t necessarily want to live our lifestyle.”

Jeff Fogel ‘69, a practicing attorney who lives in Charlottesville, Va., also went on the trip and said it was a unique experience for students to be able to compare the legal systems of the two countries. He said he noticed that more attention is being paid to sex education, family planning and promoting equal rights for gay and lesbian people. He said this is tremendous progress for a country with a tradition of a “machismo” culture that has traditionally not been accepting of gay people.

Perez, who is also of Cuban-American heritage, said he has reconsidered his views about U.S.-Cuban relations since going on the trip. “I definitely question whether the embargo is sound policy,” he said. “It mainly affects the Cuban people, not necessarily those in power.”

Linares called the trip life changing, “Personally, this trip has allowed me to learn more about my father’s country, meet family I never met before and further encourage me to help make changes that need to be made in order to regain a relationship between America and Cuba.”

This is the sixth time Professor Auffant  has travelled to Cuba with a group of law students,  lawyers, alumni and judges. Professor Auffant noted that “Cuba is a country just ninety miles off our coast and with whom we share a significant history.  Although we have never declared war against the Cuban government,  we have labeled them an enemy and subjected the Cuban people to a 50 year ‘embargo’ which has wrecked havoc on the Cuban economy, caused hardship among the Cuban people and closed Cuba as a market for American goods and travel.  It is important for law students lawyers and judges in the United States to learn about Cuba, to immerse themselves, even if for a brief period, in Cuban culture and to exchange with the Cuban people.  It’s time for change”