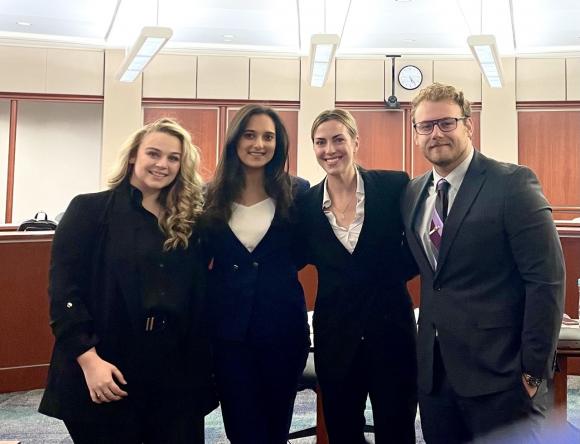 The Moot Court Board's National Trial Team competed in the All-Star Bracket Challenge – a national  invitational  virtual mock trial competition, which provided an opportunity for teams to compete and to develop the skills needed to try cases virtually, as is  now the case in many jurisdictions. More than 120 teams were considered and Rutgers Law was one of the 64 teams invited to compete. Four members of the team competed for Rutgers: George Morton RLAW ’22, Taylor Puluse RLAW ‘23, Farwa Tahir RLAW ‘23, and Rebecca Zborowski RLAW ’22.

“As a trial team member I have been given the opportunity to benefit greatly from rigorous practices throughout the semester that not only prepared me for the unpredictable challenges and complications faced during a trial, but also helped me to understand and learn the rules of evidence in a more meaningful way,” said Tahir.

During the competition, the team participated in four rounds, conducting full trials of both sides of a criminal murder case. The defendant stood accused of murdering his girlfriend after she broke off a volatile romantic relationship. In two instances prior to the victim's disappearance, the police had visited the defendant's apartment, where they lived, in response to 911 calls alleging domestic violence.  Shortly after the second instance, the alleged victim was reported missing. She had intended to break off the relationship and start a new life under a new name in another city. A decomposed body was found three years later and, after a less than perfect forensic dental analysis, was identified to be the alleged victim and the defendant was charged.

The Rutgers team won three of its four rounds, against Denver Law, San Diego Law and Campbell Law. In the fourth round, they were defeated by UCLA Law, who went on to win the region.  The National Trial Team is coached by Associate Dean Andrew Rossner, Rutherford Livengood and Trial Team Alumnus Jared Hotchkiss RLAW ’20.

Puluse said, “Being a part of the trial team has provided me and will continue to provide me with the knowledge and experience I need to be a successful trial attorney. I have experienced so much personal growth since joining the team and I’m grateful to be working collaboratively with my amazing teammates and coaches.”

In addition, The Moot Court Appellate Team competed in the Appellate Lawyers Association's moot court competition.  Team members Jack Byrnes RLAW ’22, Thomas Lloyd RLAW ‘22, Rebecca Lundgren RLAW ‘22, Adelhajda (Ajda) Sejdinovic RLAW ’22, Anthony Sirianni RLAW ‘22, and Guy Yedwab RLAW ’23 competed by writing an appellate brief to the U.S. Supreme Court and then presenting oral argument before a panel of judges. Byrnes and Sejdinovic served as lead brief writers, and Lloyd, Lundgren, Sirianni, and Yedwab served as oral advocates. Throughout the competition, the judges routinely praised our team members' exceptional advocacy skills, creative arguments, and mastery of complex cases. Team members Lloyd, Yedwab, and Sejdinovic advanced to the semi-final rounds out of a field of 24 schools. In addition, Yedwab was named the third-best oralist in the competition out of a field of more than 50 law students.
The Appellate Team's continues to represent Rutgers Law exceptionally. The team is coached by Stephen Marietta RLAW ‘’17.

The National Alternative Dispute Resolution [ADR] Team also completed its fall competition season competing virtually in the Eastern Regional of the ABA National Negotiation Competition.   Team members Adrian Bernard RLAW ‘23 and Christopher Dombakly RLAW ‘22 won both of their preliminary rounds, finishing fifth in the competition in a field of 24 teams. The competition problem involved negotiating the terms under which a student organization in a law school could provide an online platform for students to engage in dialogue about current issues. Issues for negotiation centered around the structure of the platform, monitoring and funding.

In October, ADR team members Allison Berdichevsky RLAW ‘22, Jennifer Baawuah RLAW ‘22 and Christopher Dombakly RLAW ‘22 competed in the FINRA Securities Dispute Resolution Triathalon, a competition involving three dispute resolution venues - negotiation, mediation and arbitration. The competition problem involved a dispute between a church with a predominately minority congregation and brokerage firm with in which the church alleged that their discretionary investment account produced a lower return that similar accounts for religious institutions with predominately white congregations and that the firm invested church funds in companies whose activities ran counter to the diversity and social justice investment objectives of the church.

This is the first year of the newly revamped ADR Team program and they are off to a great start. The team is coached by Dean Rossner. Michael Griffith RLAW ’16 and Amy Bard RLAW ‘82 both alumni of the law school.

All the teams look forward to a successful spring competition season.