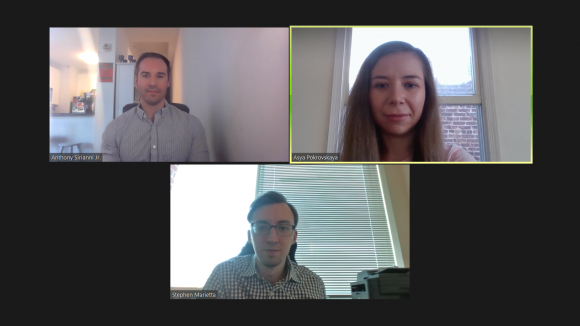 Two members of the trial team meet virtually with their coach.

Marietta explained that during the competition, team members gave multiple 15-minute oral arguments in front of a panel of three judges, who are encouraged to interrupt with questions. Team members also argued both sides of the question—in this case, both for and against the doctrine of qualified immunity.

“One skill team members have to develop very quickly is identifying the types of questions they’re getting asked and giving answers that not only effectively responds to the questions but also smoothly transitions back to their argument,” said Marietta. “It’s about reminding the bench of your great facts, responding with the correct legal precedent, and hammering home the consequences of the relief you and your adversary are seeking.”

He said in addition to the oral component, team members write a 50-page Supreme Court brief, noting that Supreme Court briefing is different than trial briefing, and that members had to make complicated constitutional arguments and think through both reasoning and policy implications of decades of Supreme Court precedent, all the while countering arguments from the other side.

Sirianni said, “What I like most about being on the team is the hands-on training. Over the last semester and a half I have written two full length appellate merits briefs, participated in two appellate competitions, and have received direct feedback from numerous attorneys. My brief writing and oral advocacy skills have grown immensely because of my coach's attention to detail. Everything that I have learned as a member of this team will aid me in my future career as an attorney.”

Pokrovskaya added, “The team was a valuable experience that helped me develop my legal research and writing skills. In our preparation for the ABA competition, we spent a significant amount of time developing legal and policy arguments and honing oral advocacy skills. This was excellent practical training that is immensely helpful in practically any legal work. I plan to pursue immigration law and know that this experience will be valuable. I would encourage other students to join the team particularly if they are planning on clerking or going into litigation.”

"As a part-time, evening student with a demanding career, NAAT gifted me the experience of collaboration -- despite immense pressure and deadlines -- to bring our A-game to advocate for our make-believe client.  Nothing at law school has provided me for the real world like this experience. Not only have my legal skills improved but, more important, I learned soft skills and faced my weaknesses head on," said Zohny.

An associate at Sullivan & Cromwell LLP, Marietta said one of  his favorite parts of law school was being on the appellate advocacy team, which, in his 3L year, advanced to the national round of the ABA competition in Chicago and returned to argue before Justice Samuel Alito at the Leonard I. Garth Competition, hosted by the law school. He has returned to Rutgers Law as a part-time lecturer and coach for the Rutgers National Appellate Advocacy Team.

Marietta is passionate about appellate advocacy and says he tries to convey the skill-building it entails to the students on his team. “A lot of students don’t realize how widespread the skills developed in appellate advocacy are,” he said.  “In addition to appeals in both federal and state courts, delivering a cogent argument and answering questions from the bench are mainstays of many administrative and international proceedings as well.”

“Particularly at the Supreme Court level, you have to think about how the relief you’re seeking will affect broader government policies and individuals aside from just the plaintiff and defendant,” he said. “You might not be as concerned with the cut and dried relief for your client as you are with how that relief will shape future litigation.”

Zohny was equally as passionate about her experience, "NAAT has been so meaningful that I stand on the proposition that this experience should be required for every law student."