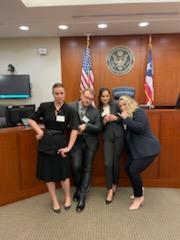 The Rutgers National Trial Team won a position in the semi-final round in the elite invitational Puerto Rico Trial Advocacy Competition [PRTAC] at the Old San Juan Courthouse last month.  They were edged out in the semifinals by Pace Law, who went on to win the Competition.  Rutgers Law sought to replicate their Championship title from last year.

Former National Trial team member Jared Hotchkiss ['21] has been assisting in coaching the team.  Jared was a member of last year's Championship National Team.  He returned to the competition with the team this year as a coach.

“The National Trial Team program continues to offer our students an opportunity to develop their trial advocacy skills at an incredibly high level.  The Team program has consistently produced excellent advocates who can compete nationally against the best resourced and most highly ranked schools in the nation.   We should all be proud of their success,” said Associate Dean Andrew Rossner, who oversees the program and coaches.  “Many thanks to the other members of the coaching staff, Rutherford Livengood and Jared Hotchkiss, who devote countless hours to assisting the team in developing superior skills,” and to the Judge Alvin Weiss Trial Advocacy Endowment and the Nathan Baker Trial Advocacy Program for their financial support,” Rossner added.