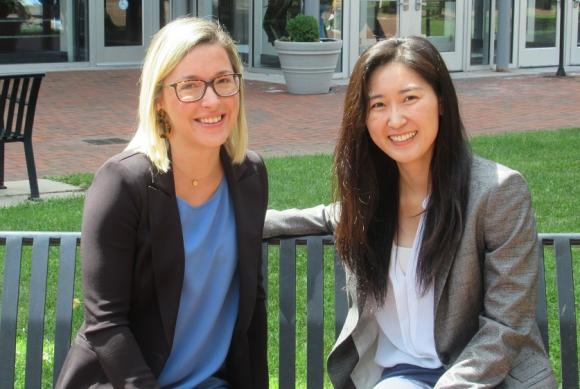 When New Jersey’s Attorney General Gurbir Grewal released a report in August showing an uptick in bias incidences in the state for the third straight year, he was using data that was analyzed, in part, by three students at Rutgers Law School.

Nicole Morgan RLAW ‘19, Marta Paczkowska RLAW ‘20, and Youngjin Park RLAW ‘20, were all participants in Professor Lou Raveson’s seminar on Selected Topics in Public Interest Law and spent some of the spring semester working on the research for the bias report in collaboration with the New Jersey Division on Civil Rights.

Raveson said the students analyzed years of data from the New Jersey State Police, culling out the most significant aspects of the data, identifying trends, creating visual representations of the data, and also offering sociological explanations for the large uptick in hate crimes over the past two years. They, finished the report in March so it could be edited by the Division on Civil Rights and the Attorney General’s office for release this summer.

Raveson said, “The three of them did exceptional work and they were a joy to work with—brilliant, diligent, always willing to rework their drafts in response to suggestions, all in an effort to do the best job that they could.  They all responded impressively to the great importance of their work and they worked collaboratively as well as any group of students I've worked with.”

The report was released widely in mid-August and the state Attorney General said the number of bias incidences at schools and involving young offenders was “disturbing” and that the state would create a task force to tackle the issue.

Among the findings were that New Jersey residents reported 569 bias incidences to law enforcement in 2018. More than a quarter of those incidences occurred on college campuses. The report also found that of 10 known offenders, most were white and male. The study also showed a 29.7% increase in reported hate incidents between 2016 and 2017. Most importantly, the report has spurred the state to create a new Interagency Task Force to Combat Youth Bias, to reduce incidences of hate, bias, and intolerance involving students and young adults.

“I hope that this report draws attention to the prevalence of bias incidents in our communities, even in the most unexpected of places, like university campuses, and conveys the seriousness with which each of us must approach the hateful rhetoric that is likely driving the perpetration of hate crimes and undermining the fabric of American society,” she said.

Park, who majored in science as an undergraduate, put the data into charts, graphs, and tables for the years 2017 and 2018 and did a statistical analysis that could be applied to the legal research. She pointed out that the analysis had to account not just for the increase in incidences, but also for the increase in the reporting of such incidences.