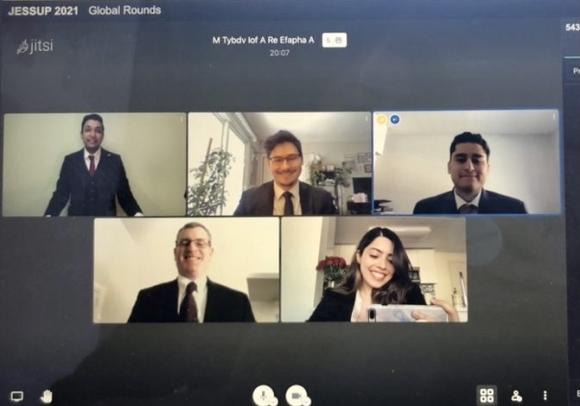 Members of the team, above, during the virtual competition.

The Rutgers Law School Jessup Team from Newark represented Rutgers in the 2021 Philip C. Jessup International Law Moot Court Competition, and placed in the top 30 percent of all teams. In the regional round, two Rutgers students placed in the top 50 out of 104 oralists.

The virtual competition included teams from around the world arguing a case that was a dispute between two fictional countries before the International Court of Justice: whether it was legal under international law for one country to impose a travel ban on the other during a global pandemic. The case also included a dispute over the rights of one country to grant asylum in their embassy to a whistleblower after she was criminally charged by the other country and whether it is illegal for a state to shoot down a civilian aircraft for national security reasons.

The months-long competition included 560 other teams from close to 100 different countries. Rutgers achieved victory over teams from China, Canada and Indonesia during the virtual competition. To prepare, the team met two to three times a week to practice between last November and this April.  Rutgers faculty and alumni assisted the team with mooting practice and advice, and the team received financial support from the Rutgers Law School-Newark Alumni Association.

“Participating in the Jessup competition has been my favorite experience in law school thus far,” said Taha. “It puts you at the forefront of today’s legal issues. One day I am reading about the shoot down of an international aircraft, and the next day I am arguing whether an almost identical shoot down was legal. Similarly, I got to hear my teammates argue over the legality of travel bans during pandemics. Having such relevant and timely topics makes the competition that much more exciting. That, combined with the experience of being grilled by international law experts during oral arguments, makes for an adrenaline-pumping experience.”

Gallagher said, “Even if you don’t plan to work in international law in the future, the oral advocacy and appellate brief writing skills you develop in the competition are invaluable. There are only a handful of chances you get as a student to get up before a panel of judges and have to think on your feet about the law. Having the chance to do it 2-3 times a week, and then daily during the competition is something that has made me more prepared to be a litigator.”

Students said the competition allowed them to connect with fellow law students from around the world, even during the pandemic. They got to know students from as far away as Egypt and Peru.

Raj said,” “The best part of this competition is not the skills you learn. It’s the community of lawyers you are able to join. I’ll never forget sharing stories of my law school experience with a group of Egyptian students, and then connecting with them later via social media. It’s a great feeling to know that future lawyers from China or Belgium now know about Rutgers Law School. I’ve also now had two separate employers who also participated in this competition, allowing us to share and laugh about our collective experiences. The competition brings us all closer in a global legal community.”

“As a Jessup participant, you are learning real research and writing skills. You’re given a set of facts, many of which are not favorable for your side. It is up to you as the advocate to understand the law that applies to those facts, and develop creative ways for it to work,” said Moreno. “We learned how to look behind the text of the law to advocate for different interpretations, or to cite to other case law as a way to bolster our claims. And we had to do all this within specific page constraints. This mirrors the work we’ll be doing soon in our legal careers.”

The team’s success underscores Rutgers Law’s expanding profile in the area of international law. In addition to participating in the Jessup Competition, the school has launched the Rutgers International Law and Human Rights Journal and opened the faculty-led Center for Transnational Law.

Pettengill said, “This competition taught me how to succinctly and persuasively present an argument. In the competition, like in the real legal practice, there is no right answer. The answer that ultimately prevails is the one that is most persuasively presented. We learned how to speak confidently and authoritatively about these undeveloped areas of the law.”