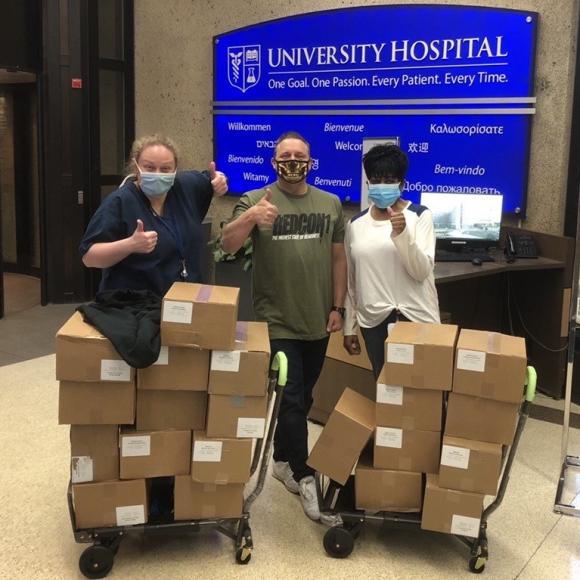 The three students, who are friends, coordinated a donation of over 5,000 breakfast and protein bars from a Florida company then delivered the healthy snacks to University Hospital in late April. Their goal was to assist the medical staff working long hours because of the Covid-19 pandemic.

Shane Kronstedt, who just finished his first year of medical school at RRWJMS, and Scott Frezzo, RLAW ’22, were helped by a third friend, a law student who works for the Florida company, and who wants to remain anonymous. They coordinated the delivery with the help of Michael Petti and Anne Egan at University Hospital.

Frezzo said his mid-sized SUV was filled nearly to the brim when he hand-delivered the food April 25 and was met by Egan at the hospital, “She was thrilled, she really made me feel like I was saving the world even though it was just protein bars.” He said he took precautions before entering the hospital including donning a mask and having his temperature checked.

The Rutgers law student works in the legal department of RedCon1 and was there over spring break. He learned his company had donated protein bars to a Florida hospital and he asked the company’s CEO, Aaron Singerman, if he would consider doing the same for University Hospital in Newark.

Once Singerman agreed, that student reached out to his friends to help with the delivery. Kronstedt agreed to have the healthy bars delivered to his home and Frezzo offered to deliver them. Both men previously served in the military and got to know each other through a mutual Rutgers friend.

Kronstedt, who is the President of the Emergency Medicine Interest Group, at his medical school and a student leader with the American College of Emergency Physicians of New Jersey, had suggested donating the bars to the emergency department at University Hospital.
The law student in Florida organized the delivery, and Kronstedt and Frezzo received, nearly 1,000 pounds of protein bars, weighing over 800 pounds, on a 5X5 foot pallet. The men unloaded the bars, then repacked them in Frezzo’s car to deliver them to Newark. Frezzo said it took a few trips to get the bars to the hospital cafeteria, where he saw medical personnel eating premade dinners quickly out of disposable containers, “I had the sense there was extremely limited time to take for themselves.”

Since then, the three friends also coordinated a donation from RedCon1 to the emergency department personnel at Downstate SUNY Downstate Medical Center in Brooklyn.

“I thought it was great, I’d do it all over again,” said Kronstedt, who said the donation was appreciated by the University Hospital staff. “It was awesome. It looked like everybody was really happy.”

Kronstedt, whose wife is  a doctor who works in New York City, said he understands the pressure medical staff is under since the pandemic began, “It was a good choice, seems like the stuff is pretty good quality, everybody’s slammed, working and working extra hard and pulling extra shifts.”