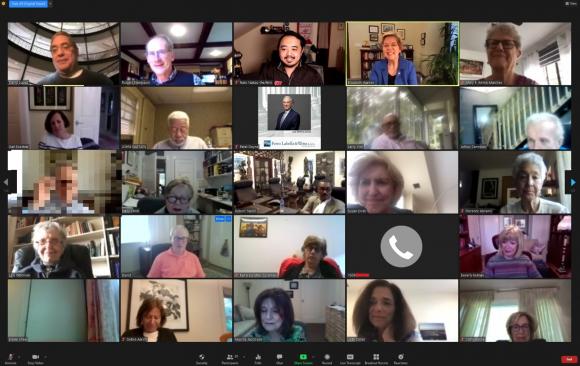 The Newark Class of 1976 gathered virtually for their spring reunion in anticipation of an in-person reunion in the fall.

Were 2020 and 2021 normal years, Newark decennial classes ending in ’0 and ’1 would have held reunions in April of those years. The next best substitute is a “Zoom Reunion,” and ten of these have been held as “cocktail hours” in April and May this year. More than 200 alumni attended, including Senator Elizabeth Warren ’76.

Zoom fatigue? One would not have noticed it among those who attended. “It was a lot of fun and for the hour almost fifty years just disappeared—wish we could bottle that to last more than an hour,” wrote Gary Tarino ’76, following his class’ gathering.

All classes want the real in-person event, and the law school is committed to holding actual reunions this fall as soon as Rutgers University establishes the health protocols for holding outside events in University facilities. The model has been for classes to gather for a half-day program at the law school, including two hours of CLE (one with ethics credit), followed by cocktails and individual class dinners at the former law school, now known as “Ruth Bader Ginsburg Hall,” at 15 Washington Street. This autumn’s reunions, though, may follow a different format to accommodate possible size limitations in the University’s protocols.

For Senator Warren, “[Professor] Alan Axelrod is the reason I ended up in teaching. He visited me at Penn. I miss him. I miss all of you.”

The award for the largest (41 attendees) and wildest Zoom goes to the class of 2011. The class broke into breakout rooms to update each other on how their lives and careers have progressed since school, but then many opted to join the popular Asian/Pacific-American Law Students Association (APALSA) room. When all regrouped, Kyle Smiddie’s 5-year-old daughter, Kate, took center stage interviewing class members and enticing them to include their children, such as Zaara Bajwa Nazir’s daughter Lilah.