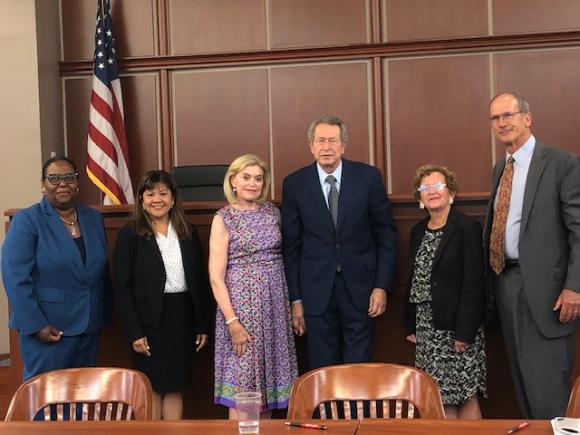 While this major gift will be a bequest, Jerry Baker has supported the expansion of the law school’s Trial Advocacy Program in Newark with annual gifts now amounting to $15,000 per year. With his steadfast support, the program now provides more students with opportunities to develop trial advocacy skills and share his love for the craft, as well as providing students with the opportunity to develop advanced trial advocacy skills through participation in the National Trial Team. In six years, the Team has become a nationally recognized team that consistently competes effectively with top ten schools in trial advocacy.

For many years now, Jerry Baker’s financial and personal support of the Nathan Baker Trial Competition has been a cornerstone of providing students with an opportunity to try their hand at trial work and develop a taste for the discipline. Each year, dozens of students participate. Baker not only has supported the Competition financially, he personally participates in the judging, arranges for a financial award for the winners and provides guidance to the finalists.

In 2015, Associate Dean for Professional and Skills Education Andrew Rossner reorganized Newark’s trial advocacy program to enhance the educational and skill training value of the Baker Competition and provide a structured advocacy training program for a competitive National Trial Team. The vision was to enhance the Baker Competition and to build upon the Baker Competition’s success by creating a competitive trial team with trial advocacy training at a very sophisticated level. This would not only be a great benefit to those students but would also enable Rutgers Law to compete effectively against the best trial teams in the nation. Jerry Baker became a full partner in that venture.

The goal was to raise Rutgers’s national reputation for trial advocacy training by competing and winning against the schools with the highest ranked trial advocacy programs. While a well-structured trial advocacy training program is essential component of that venture, an equally essential component is having the funding to participate in the invitational competitions. Quite simply, traveling and competing is expensive and teams that are highly ranked have the resources to compete in many elite competitions, wherever they occur. They have significant financial resources to compete widely, while Rutgers did not. Through Baker’s financial support, the team has been able to compete successfully more broadly and to develop a national reputation. In addition, with the ability to participate in more competitions, the school has been able to expand the number of students on the team, so now more students can benefit from both the advanced training and the competition.

This spring national team members George Morton (3L), Rebecca Zborowski (3L), Taylor Puluse (2L) and Farwa Tahir (2L) competed in the Puerto Rico Trial Competition, to which the school was invited for the second year in a row.  Among the schools they beat were, Cornell, Harvard, Temple (ranked #1 in trial advocacy nationally), and Stetson (ranked #3 nationally).  Baylor (tied with Temple for #1), beat Rutgers in the semi-final round.  However, in the prior year’s Puerto Rico competition, Rutgers had beaten Baylor.

Gerald Baker, an alumnus of Cornell University and Yale Law School, and son of Nathan Baker RLAW'27, has devoted his career to the representation of the injured in practice areas as diverse as personal injury, medical malpractice, products liability and aviation accidents. His trials have resulted in groundbreaking personal injury cases and major high-profile claims. He has held leadership positions in the Hudson County Bar Association, New Jersey Association of Justice, New Jersey Institute for Continuing Legal Education, and the New Jersey State Bar Association. He is well known for his continuing legal education lectures to the practicing bar under the auspices of these organizations. His intent in creating this bequest is to build on the significant philanthropy to Rutgers Law School on his part and on that of his family, who created the Nathan Baker Trial Advocacy Program and built the Nathan Baker Trial Courtroom in memory of his father.