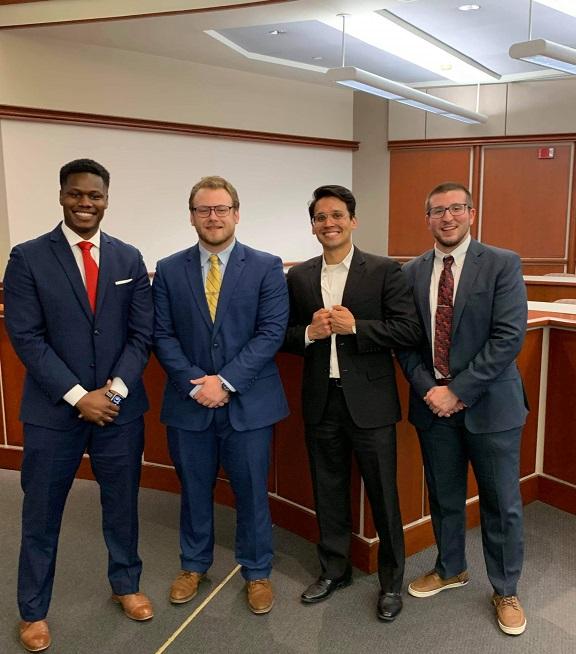 “Our National Trial Team continues to raise Rutgers Law’s national profile for mock trial competitions,” said Associate Dean Andrew Rossner, the team’s coach and faculty advisor to the Moot Court Board. “We should be extraordinarily proud of their achievement.  They represented Rutgers well.” Ford Livengood also helps coach the team.

"Rutgers Law continues to be proud of our National Trial Team and congratulates them on their recent victory in the Puerto Rico competition," said Co-Dean David Lopez. "They have worked hard and shown tremendous skills and represent the best of what Rutgers Law has to offer."

“Competing in this tournament and being on this team has only reinforced to me the notion that collaboration, repetition, and good camaraderie can lead to success,” said Amakihe. “Winning the tournament was great, but seeing the level of growth my teammates and I have shown over the course of this year training for these competitions has been outstanding. This will definitely be one of my best memories from law school.”

Based upon Rutgers’ successes in the past five years, it was one of only 14 teams nationally to be invited to this elite invitational competition. Competition teams had to try both sides of criminal case involving charges against a state senator who is alleged to have taken a bribe in exchange for using influence to obtain a government benefit for a constituent in an undercover sting, while the senator maintained the payment was a legitimate campaign contribution.

“The 2021 Puerto Rico Trial Advocacy Competition was the thrilling culmination of my trial team experience. The weight of the moment really cleared my mind. Like in my trial team training, I was forced to think on the spot while contending with uncooperative witnesses, competing theories, and the rules of evidence,” said Avalos.

The Newark National Trial Team represents Rutgers Law in Regional and National Mock Trial Competitions.  Six years ago, we restructured the program to make Rutgers Law even more competitive in national competitions and to provide students class credit for their participation.

Hotchkiss said, “The coaches have done a great job instilling their values into the team and the team in turn has done a great job in representing both our coaches and the school. Though sometimes, most of the time, I felt like I was focusing more on the team than I was on my classes, I wouldn't change a thing. The team - if you give it your all - makes you a better student, a better advocate, and a better person.”