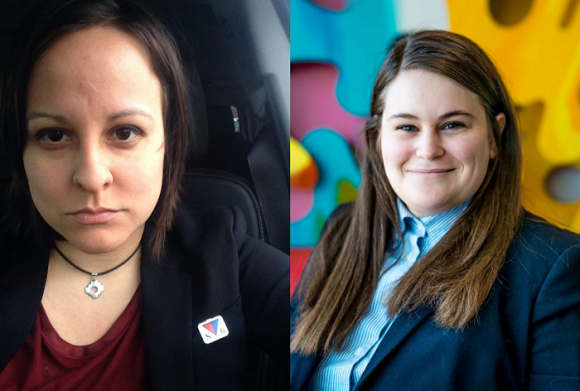 Tina Taboada, left, and Erin Stidham, right, each won a scholarship from the New Jersey Women Lawyers Association this spring.

Because of the Covid-19 pandemic, the students were honored virtually, though NJWLA plans to host a gala in march 2021 where the winners will be recognized.

Stidham was a fellow for the Rutgers Center for Gender, Sexuality, Law and Policy, a Co-Chair of the Women’s Law Forum, President of Stop Violence Against Women, and Secretary for the LGBTQ+ Caucus. She participated in three judicial internships during law school and won several awards – including the Paul and Carol Miller Scholarship, which is based on academic merit.

Tina Taboada has been involved in several organizations at law school and in the wider community. She won Best Appellee Oral Argument in her LAWR section, is a member of the Minority Student Program, and has taken part in the Pro Bono Power of Attorney Workshop Citizenship Rutgers: Pathways to Citizenship and is a volunteer for the Income Tax Assistance Program.

"I was so excited when I got the news. It's a great honor to have won this from what is an amazing organization supporting women in the law. This is something I will always be proud of," Taboada said.

In addition, she has served as an election inspector.

Both students wrote essays as part of the scholarship competition that talked about the importance of passing the Equal Rights Amendment.

“It is clear that equal rights should be enshrined in the American Constitution. Not simply for our status right now, but for future generations,” said Stidham in her essay. ”Without constitutional protection, women’s position is tenuous, which renders them not-full participants and citizens. We should be part of a society that has in its most fundamental document an acknowledgment that women and men are equal.”

Taboada’s essay said, “Now, as much as ever, the need for the Equal Rights Amendment is paramount. This is because history has shown us there is no substitute for equal protection under the law. Further, the current statutory framework has been insufficient to remedy the underlying systemic issues. And finally, reliance on judicial precedent is misplaced given the current Court’s non-deference to stare decisis. Certainly, without equal protection, a minority is relegated to second class citizenship.”

The NJWLA began its scholarship program in 2009 to benefit women who are pursuing a law degree at one of New Jersey’s three law school campuses.