"These human beings had endured a lifetime of hardship, from wrongful imprisonments, to torture, to sexual assault, to withstanding bombings and gunfire, and countless other forms of persecution. " 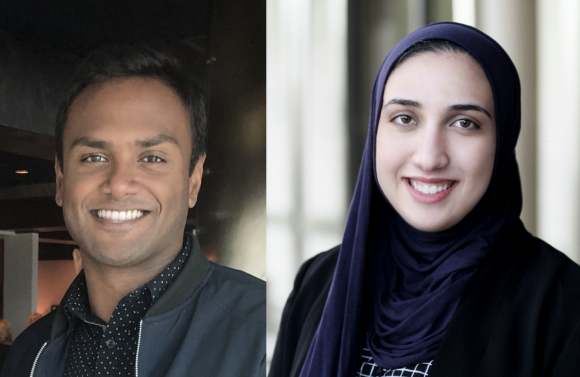 "We witnessed first-hand the effects that a civil war can have on the individuals who are caught in the crossfire."

Learning about the refugee crisis through the media is stark in contrast to being immersed in a country that hosts a plethora of refugees and is at the center of a refugee crisis. In January 2020, two Rutgers Law School International Refugee Assistance Project (IRAP) student members, Alexis Abuhadba RLAW ‘23, right, and Dorian Deen RLAW ‘21, left, received the opportunity to travel to Amman, Jordan and learn more about the refugee experience. While there, they also conducting intake interviews with Iraqi and Syrian refugees in order to determine whether IRAP could provide legal aid for a potential resettlement process.

The trip began with two days of various segments focused on the refugee crisis, which provided a variety of lenses to understand the current situation. IRAP guest lecturers first explained the refugee crisis in context of modern Jordan’s history and politics, which enabled us to better understand how Jordan’s geographic location and historical events led to it becoming a hub which hosts over 600,000 refugees. The following segment focused on the US refugee admissions program and family reunification options, which served as a comprehensive lesson on the refugee process, beginning from the moment a refugee leaves their country to being potentially resettled.

We learned about refugees’ tumultuous journey from escaping, the different risk groups such as women and children at risk and LGBTQ+, the various wait times, agencies involved in the process and many other factors. It is well-known that the refugee process is long and distressing, yet the various factors that play a role in this entire process and the many details that encompass this process shed light on how easy it is for individuals with limited resources to get caught in the refugee cycle.

Lastly, we took part in two panels: one in which locally Amman-focused NGOs such as Justice Center for Legal Aid, Collateral Repair Project and Sawiyan educated us on their efforts to provide refugee protection in the area, and another in which directors for the UNHCR and the IOM U.S. Resettlement Support Center described the refugee resettlement process directly through their own eyes and experiences. It was a very interesting chance to hear the UNHCR and IOM representatives discuss their objectives for FY2020. In a time where refugee resettlement numbers, in-total, have fallen drastically worldwide, they represented radiating beacons of optimism for the current refugee climate.

The two organizations made it a point to encourage us and the other student volunteers to focus on the positives, such as not dwelling on the fact that hardly 1,300 refugees from the near-east were resettled in FY 2019 (down from 10,000+ in 2016), and instead focusing on the fact that the IOM and UNHCR’s FY2020 goal is to rebuild resettlement numbers out of the near-east up to 7,000.

Following the educational component, we were trained extensively on how to conduct intake interviews with refugees which focused on how to use our newly gained legal knowledge to understand a refugee’s timeline and ask the right questions, to what seemed most difficult: how to sit across an individual with a traumatic experience and not let our emotions take over.

The purpose of intake interviews is to gather information that is used to determine whether or not IRAP can provide legal assistance to displaced individuals and families, whether it be through identifying cases that fit the eligibility criteria for resettlement to flag for UNCHR’s attention, helping refugees prepare for resettlement interviews, or assisting those that have been rejected by the U.S. with appealing those decisions. The interviews were conducted in pairs, with one student leading the two-hour long interview while another collected documentation and took diligent notes for later use by the supervising attorneys.

Through the help of IRAP interpreters, Iraqi and Syrian refugees recounted powerful stories of leaving their homelands and seeking protection in Jordan. Each intake came with a story that reflected their dire situation. Although there are a number of organizations available to help refugees, assistance is limited due to overwhelming needs, and often these individuals either do not know how, or are afraid, to access help. These human beings had endured a lifetime of hardship, from wrongful imprisonments, to torture, to sexual assault, to withstanding bombings and gunfire, and countless other forms of persecution.

In order to potentially receive legal aid, they recounted painful experiences of being sexually assaulted and harassed as women at risk, to being tortured and denied protection and having to flee their homeland and facing hunger and uncertainty. Nothing can prepare one for having to sit with an individual as they hesitantly recount their trauma with pain and hopelessness in their eyes. Yet, this experience provided us with a perspective on the refugee crisis in the Middle East that could only be attained by sitting down with refugees and their families in person, and listening as they told their stories.

In the end, we could not have dreamt of receiving a more hands-on learning experience on the refugee crisis in the Middle East than by flying 5,700 miles across the world and being face to face with refugees. We witnessed first-hand the effects that a civil war can have on the individuals who are caught in the crossfire. We saw just how arduous the immigration and resettlement process can be, for both the displaced peoples and the organizations in charge of administering aid and resettlement support. We learned more than we could have ever grasped by simply looking at immigration and visa forms while home in New Jersey. It was a privilege and an honor to learn of these refugees’ strength, and to join IRAP in helping provide those with the assistance they require. It was an experience we would share in again, in a heartbeat.

The International Refugee Assistance Project is a nonprofit that provides legal advocacy for refugees and displaced people in need of a safe place to call home. IRAP works with clients to identify and navigate pathways to safety through free direct legal representation, systemic advocacy, and litigation. A signature part of IRAP's structure is engaging teams of law students at law schools throughout the U.S. and Canada to support these efforts, both through assisting with direct legal representation and also through advocacy and specific projects. Operating under the Public Interest/Pro Bono program office, the IRAP Rutgers Chapter in Newark was founded several years ago and currently has 24 members.

Alexis Abuhadba, pictured on the right, is a 1LE student at Rutgers Law School and 1LE Co-Chair of the I-130 Project within IRAP. She has a strong interest in refugee rights, immigration and international law.

Dorian Deen, pictured on the left, is a 2L student at Rutgers Law School and Deputy Director for IRAP. He has a strong interest in refugee rights and policy.