"This experience enabled me to see the powerful role that attorneys can play in promoting access to justice and inspired me to pursue a career as a public interest attorney." 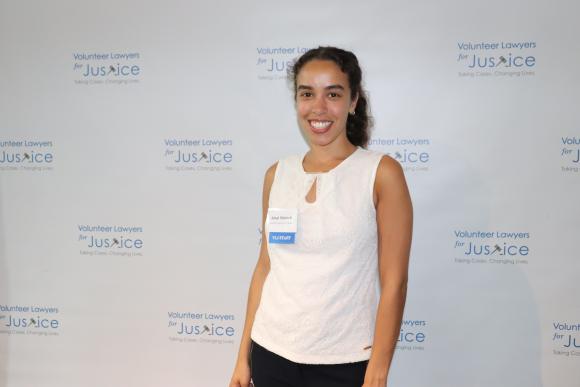 Mimish is a summer legal intern at Volunteer Lawyers for Justice, where she assists in providing civil legal services to low-income residents in Essex County.

My commitment to the public interest was seeded when I was an adolescent and remains unwavering. As a young teen, I faced homelessness. I was raised on the New Jersey shore by a single mother of four children. We relied on public assistance to survive and ultimately lost our housing altogether. Experiencing homelessness taught me how to be resilient, but I also felt a sense of injustice when seeing other families with much more than mine. I did not understand what I had done to deserve so much less than others.

My interest in a public interest legal career was piqued during my time working as a labor organizer on the Good Jobs Nation campaign for higher wages and benefits with federally subcontracted workers. I was hired as a full-time organizer after proving my commitment to the campaign by striking with my co-workers while a barista at Pret a Manger in Washington, D.C.’s Union Station. Our efforts paid off when, after five strikes, President Obama signed an Executive Order raising wages for federally subcontracted workers, paving the way for cities and states across the country to act on increasing minimum wages—the effects of which are still being felt today.

Yet, low wages and a lack of employee benefits were not the only grievances I heard from workers in federal buildings, though they were the main priority of the Good Jobs Nation campaign. Retaliation for striking, immigration issues, and sexual harassment were among the circumstances that arose and called for the assistance of a lawyer to remedy. At times, I wished there was more that I could do, but I knew little about the law and its processes then.

To whet my appetite for the law, I worked as a civil rights paralegal for over two years at the Washington Lawyers’ Committee for Civil Rights & Urban Affairs, where I provided litigation support to attorney staff on class action, civil rights matters. Among my responsibilities was to oversee the organization’s pro bono intake interviews, and through my work, I noted a pattern of potential racial disparities in the way that transit police enforced fare evasion in Washington, D.C.

Working closely with my legal supervisor, I initiated the firm’s submission and review of public records requests, which confirmed that in fact, transit police were far more likely to pursue citations for fare evasion in cases involving young people of color. These findings culminated in a widely cited policy report, which became the impetus for the city council to vote to decriminalize fare evasion. This experience enabled me to see the powerful role that attorneys can play in promoting access to justice and inspired me to pursue a career as a public interest attorney.

Now, as a Rutgers Law student, I have volunteered with the Police Accountability Project, where I surveyed South Ward residents about their interactions with police as part of a DOJ consent decree. I was voted Co-Chair of the Public Interest Law Student Association (PILSA) for the 2019-2020 academic year and will raise money for law students in unpaid summer public interest internships in 2020. I was also selected as a Kinoy-Stavis Public Interest Fellow and will work at the Rutgers Law International Human Rights Clinic alongside other Kinoy-Stavis Fellows for the next two years.

This summer, I am a summer legal intern at Volunteer Lawyers for Justice, where I assist in providing civil legal services to low-income residents in Essex County and work on the tenancy and consumer law programs. VLJ’s mission is to improve the lives of economically disadvantaged adults, children, and families in New Jersey by empowering them with tools, advice, and pro bono representation with the goal of securing fair and equal treatment within the legal system. It is only through the assistance of VLJ’s committed volunteers and community partners that our staff is able to make that goal a reality for so many low-income families in New Jersey with critical unmet legal needs.

Amal Abdelelah Mimish is a fierce advocate for social justice with an unwavering commitment to the public interest. Before attending law school, Mimish worked as a labor organizer and civil rights paralegal. This summer, she is providing free civil legal services to low-income Essex County residents at Volunteer Lawyers for Justice. After law school, Mimish intends to work on housing and policing matters, keeping in mind that economic justice is the unfinished business of the civil rights movement. Other programs that she is affiliated with at Rutgers Law School are the Minority Student Program (MSP), Kinoy-Stavis Public Interest Fellowship Program, the National Lawyers Guild (NLG), and the Student Mental Health Alliance.