"I can now confidently attest to the fact that there’s no such thing as a typical Rutgers Law student." 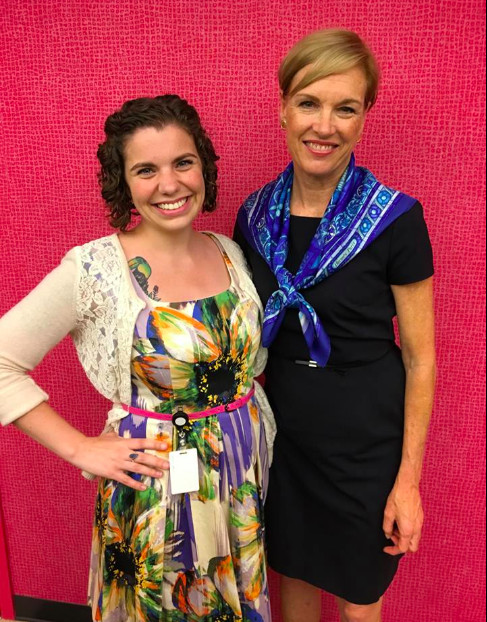 Doyle with Cecile Richards, former president of Planned Parenthood and co-founder of SuperMajority.

I’ve heard a lot of people say, “I always knew I wanted to be a lawyer.” That was not the case for me. The pursuit of law was something that I only ever passively considered, sort of in an, “eh, that could be cool,” or, “I guess I could be good at that,” way. It wasn’t until I was working at Planned Parenthood in the immediate aftermath of the 2016 presidential election that this passive interest changed to an active need to pursue a future in law.

I didn’t especially like my position at Planned Parenthood, but I loved the organization and for all that it stood. After the election, I received calls constantly from prospective volunteers asking how they could help support our mission. People were so eager to contribute their time and talents, and while I knew I was indeed doing that in my capacity as human resources director for our affiliate, I felt like I wasn’t contributing directly to the mission—only adjacently contributing. I wanted to make a career change with the power to positively impact the lives of patients and abortion providers alike.

But how best to do that? At the time Trump was inaugurated, I was 28 years old, I owned a house, and my partner was established in his career. As the threat of a post-Roe America began to ever-larger loom in the not-so-distant future, I couldn’t shake this suddenly urgent need to wield the law, but I also selfishly grappled with my age and overall stability. Law school for me would mean being a nontraditional student—was I ready for that? And was I ready to leave a cushy (yet demanding) job to take on more student loan debt, sell my house, and ask my partner to uproot his life, too?

It took me a while to get up the courage to set the plan in motion, but I started applying to schools in the months leading up to my 30th birthday. Admittedly, Rutgers was not initially on my radar (don’t shoot the messenger—I’m from the South!), but my partner gifted me an RBG biography as a congratulatory gift for taking the LSAT. As I read about her time at the school, I knew I had to apply here.

Fast forward to my actually making the decision to attend Rutgers. After the house was rented, the jobs were quit, trucks were packed and goodbyes were said, the sense of doom really began to set in.

I am going to be the oldest person there.

I am going to have to walk across the graduation stage with a cane.

There were a lot of compounding elements—I’d grown up without money, I didn’t have connections to attorneys, I was raised by an immigrant—and I let all of these marks against me roll around in my head all day. Especially on orientation day.

I sat by myself for the first half of the day and wondered how much it would cost to move back to Virginia and pretend this had never happened. At some point, we had to chat with the person closest to us and learn a bit about them. I was surprised when they weren’t right out of undergrad and had worked between that experience and law school (note: this is not actually a surprise, and I am just silly), and equally surprised when people understood “Legally Blonde” movie references (wow, they can’t be that young!). And can you imagine my shock when not everyone was the child of a successful attorney!?

I can now confidently attest to the fact that there’s no such thing as a typical Rutgers Law student. Sure, there are the numbers and the fact sheets. But also consider the following:

If you’re unsure because you have not always thought “I want to be a lawyer,” you still belong here.

If you’re insecure about your belongingness because of your age, you still belong here.

If you’re afraid you won’t fit in because you don’t have connections to the legal field, you still belong here.

I’ll see you on the bridge!

Kate Doyle is a 1L student at Rutgers Law School in Camden. If she weren’t studying law, she’d be a cheesemonger.