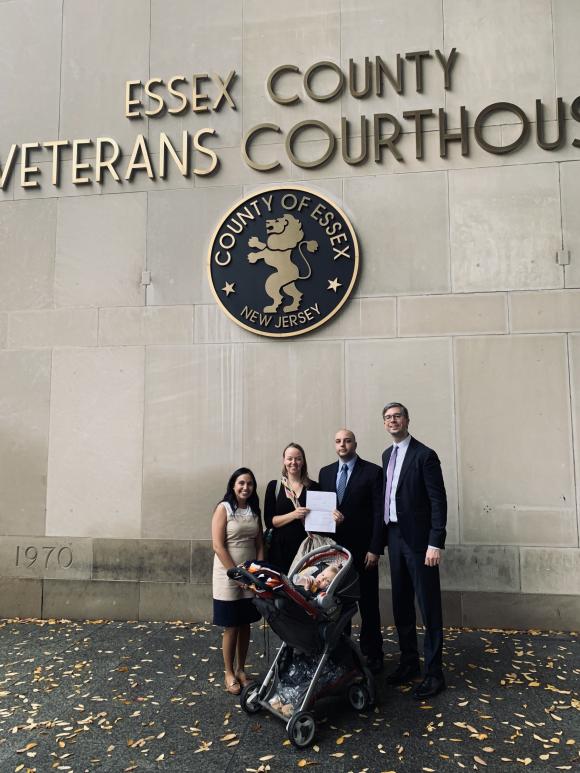 Students from the Constitutional Law Clinic, International Human Rights Clinic, and other clinics, provided legal assistance through the Voting Rights Project in Newark.

When, on the morning of election day, I found out I wasn’t on the books, it hit me perhaps harder than most. I spent two years meeting Afghans who traveled great distances on pockmarked, insecure roads to vote, quite literally risking injury or death every step of the way. Then I worked on democracy programs in Afghanistan. Voting and representation is a serious business for me. So the fact that I’d believed myself registered at the Department of Motor Vehicles, but then just...wasn’t, was not the end of my story.

I showed up to the County Superintendent of Elections’ office disoriented and clueless. I was rejected first: I still couldn’t vote without being registered, before being shepherded toward a courtroom and into a group of friendly, enthusiastic, and well-dressed folks with a “Voter Assistance” sign. It turns out, of course, that if you’re asking to vote without being registered, the government is legally obligated to turn you down flat, but a judge - on call for just that purpose - can give you special permission.

There I am, spontaneously facing my first court appearance ever, still confused about how I landed in a courthouse, duly intimidated at the knowledge that I’m to be “sworn in” to state my case to an actual judge. Enter Rutgers Law. Your representatives were approachable, efficient, and serious about my right to vote, as serious as I was. They went above and beyond: they went over my case with me (“straightforward,” they said, with obvious pleasure), explained the process for the first time, and drowned out the little voice in my head saying, “this is silly, I should probably just give up.” In the courtroom, they spoke enthusiastically on my behalf. I was deeply grateful not to be on the spot, alone, with two smartly-suited attorneys across the way, opposing my case for reasons I didn’t even understand.

Or, actually, I would have been all alone AND lugging my 11-month-old son. Instead, one of my pair of law students had picked him up, waved me forward to give my statement, and was tickling or making silly faces at him every time I looked back. I specifically want to recognize the lack of ego I witnessed in the pair I worked with. They were focused on helping me in whatever way I needed it; if that included manhandling a stroller or entertaining a toddler, they were on board, cheerfully and without complaint.

I was especially alarmed to realize that a provisional vote - an alternative method suggested to me by a number of people, including a poll worker, and something I almost agreed to - would have been discarded as soon as it was compared against the register. Though I didn’t know this, my Rutgers counselors of course did and fought for a full, unqualified vote.

My outcome was a happy one. I was able to head home afterward with a signed order in my hand and cast my vote like everyone else. But the experience will stick in my head more as one of the many faces of voter suppression, however inadvertent that effect may be. In this tale of voter suppression, and in hundreds more around the state, Rutgers Law plays the hero.

I found out later that you have been serving across New Jersey in this way on election day for years and years, always free. Thank you. I’m so grateful to have met Maria, Zeyad, Brian, and Penny. You have earned a permanent fan of Rutgers Law and the ethics you are clearly instilling in your students.

Marie Deschamps is a voter in New Jersey who was helped by the Voting Rights Project on Election Day.