"I think the Court represents the nation’s resilience and persistence in fighting for justice." 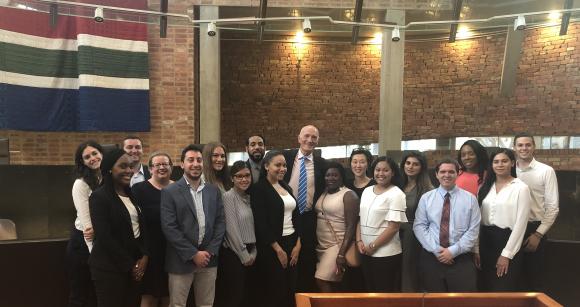 Students on the trip had the honor of visiting South Africa’s Constitutional Court—their equivalent to the Supreme Court of the United States—and met with Justice Edwin Cameron.

I think I returned home from the trip a different person, maybe a little better person. What I loved the most about the experience is that we were able to see the country from so many different perspectives and to learn the culture as much as it was possible within the given time. I am also happy I was able to build relationships with my classmates, who made my time in South Africa even more enjoyable. And although it is very hard to pick the best part of the trip, as a nature lover, I will keep the moments spent basking in the sun on Camps Bay beach, conquering Table Mountain, being mesmerized by the views of Cape of Good Hope, and cruising through Kruger National Park at night, the closest to my heart.

One of the most valuable features of the South African trip, in my opinion, was the opportunity to see the country from different perspectives. I appreciate that we were able to visit Langa and hear the stories of people living in the township. It was a very humbling experience that I think helped all of us realize how much we take in life for granted. South African townships are testimony to what years of oppression and discrimination against certain groups of the population ultimately leads to. Seeing the living conditions of Langa people was especially startling after seeing beautiful beach houses in Cape Town. That is probably one of my most vivid memories of the country—the gap between the rich and the poor.

I also truly enjoyed our visit to Constitutional Hill in Johannesburg. It was an unforgettable experience to walk through The Old Fort complex known as Number Four, see an awaiting-trial block that was constructed in 1920, and hear stories about both political activists opposed to apartheid and common criminals that were held at the prison. I learned that famous political activists like Mahatma Gandhi, Nelson Mandela, and Robert Sobukwe were imprisoned and held in inhumane conditions in Number Four. As a result of holding these political prisoners, the prison was once called “The Robben Island of Johannesburg.”

Visiting the Constitutional Court and speaking with Justice Cameron was a truly inspiring experience. Walking inside the building and learning about the symbolic meaning of all architectural details was breathtaking. Although I was tempted to research the Court before the trip, I am so thankful I restrained myself from it because I was soaking in every specific fact about the court and was being impressed by its history beyond words. I think the Court represents the nation’s resilience and persistence in fighting for justice. It is exemplified by the decision to construct the Court building using bricks from the demolished awaiting-trial wing of the former prison. I also learned later that most of the prison was demolished to make way for the new court, but the stairwells were kept and incorporated into the new building as a reminder of the Constitution’s transformative aspirations.

I was surprised by how accessible to the public the building was, without any significant security system, which signifies the trust people have in the court system. Justice Cameron also mentioned this fact, emphasizing that the public sees the court as a protector of their rights, therefore, people do not have a reason to be upset by the justice system. And when people are not upset, there is no need for protection from the people.

As I was sitting in that beautiful courtroom and listening to the Justice, I couldn’t stop thinking about how the justice system can influence the course of the whole country. From Grootboom decision to Court’s determination that president Zuma violated the Constitution by not adhering to a state watchdog agency’s recommendation, the Constitutional Court has established itself as an independent branch that protects the public. Being raised in a country where the justice system has unfortunately not always served the people, is not independent from the executive branch, and where people do not have faith in the system itself, I am amazed at South Africa’s persistence in its fight for justice, independent courts, and protection of human rights provided by the Constitution. Although there is still a lot to be achieved as the country continues to grapple with socio-economic inequality and corruption in government, I am optimistic about South Africa's future and I could sense people’s voracious desire for a democratic and fair society.

I also loved our trip to Robben Island and learning its history. Just the idea of stepping on the ground where Nelson Mandela had to spend 18 of the 27 years of imprisonment was difficult for me to believe. Before visiting the Island, I did not know that it was used as a leper colony and animal quarantine station. I truly enjoyed the stories told by our tour guide, a former political prisoner that was held on the island for 8 years. Among them, there were stories about Nelson Mandela, from which I learned that Mandela had buried his first draft of his memoir Long Walk to Freedom on the prison’s site.

One of the most impressive experiences for me was also visiting Hector Pieterson Memorial and Museum. A news photograph by Sam Nzima of the mortally wounded Pieterson being carried by Mbuyisa Makhubo while his sister Antoinette ran next to them is forever carved in my memory. One of the signs in the Museum says that Mbuyisa's mother told the Truth and Reconciliation Commission that she received a letter from Mbuyisa in 1978 from Nigeria, but she has not heard from him since which left me wondering what turns his life actually took after this horrific incident.

All in all, this trip was truly a life experience for me and I am so grateful and happy I decided to take this class and learn about South African culture, history, and people.

Guzel Sadykova is a second-year student at Rutgers Law and serves as a Minority Student Program (MSP) Teaching Fellow. She received her B.A. in Political Science and Government from Stockton University.