"I honestly don’t know if I would have had the confidence to go to law school without music." 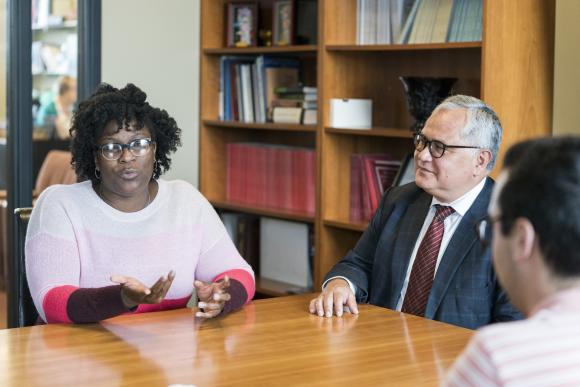 Koster shares how being a self-described "music nerd" helped her get through the challenges of law school.

I am a nerd. I fully understand everyone in law school has some level of nerdtivity, but my nerd-dom is on a level for which emojis are inspired. As a matter of fact, I had the nerd emoji glasses a few years before the nerd emoji was released. My nerdiness has led me to have a few questionably healthy obsessions: political news, John Sandford and Carl Hiaasen books, baby animals, and nail polish. Nevertheless, my biggest lifelong obsession is music.

Music is that thing that makes my heart beat – music is my best friend, my solace, my turn up, and my peace. Other than God, music is the one thing that has never betrayed my hope, trust, and faith.

So, what does this have to do with my being a law student? I honestly don’t know if I would have had the confidence to go to law school without music. I have always known I was good at music as I have been singing for most of my life. When times are hard, I sing and I hear myself singing and it sounds good; it reminds me that I am talented and capable and will get through this hardship too. My confidence in music’s ability to get me through has helped to keep me putting one foot in front of the other.

I never felt challenged in school as a child and I developed horrible study habits. In 2009, I made my third attempt at college. I approached this last attempt like it was a job and not school. I applied my work ethic to earning my Bachelor's and was able to finish it in two and a half years. After undergrad, I earned a Master of Public Administration at Rutgers University–Camden. Though I didn’t breeze through my MPA program as easily, it instilled confidence in my scholastic ability that was utterly and completely destroyed after my first semester of law school.

I loved Rutgers Law School in Camden. I have such pride in this institution. I love my professors. I love the administration and I have such a heartfelt love, appreciation, and admiration for my fellow classmates—it is unreal. Submitting my application to this law school is one of the best things I have ever done – full stop. Honor and pride fills me every time I enter the building for no other reason than they allow me access to this place.

With all of that said, law school is the hardest thing I have ever done in my life and I would not be here if not for the natural catharsis and solace I get from music. Music has been my faithful companion when I needed help getting through a paper or the turn up I needed to get moving when I was totally unmotivated to get out of bed.

This academic year, I made history as the first African-American to be elected President of the Student Bar Association at Rutgers, which I largely attribute to that thing God put in me: music. I believe everyone has a thing God put in them to help them achieve that for which we, individually, were placed on this planet. It is important for each one of us to identify that thing for ourselves and use it to accomplish that which we think is impossible.

After I finish taking the bar exam, I am going to start looking for a band to sing with in order to restore some of the balance that I had before law school. It brings me joy to let my music nerd flag fly, so if your thing is music and you ever want to nerd out with me, hit me up! Also, if you have a band and are looking for a singer, I’ll be free after the first week of August.

Julianna Koster was born in Manhattan on February 29, 1980, and grew up in Jackson, New Jersey. Before coming to Rutgers Law, she lived in Hawaii and worked as a bar server on Norwegian Cruise Line’s Pride of Aloha—eventually being promoted to Captain’s Secretary. She went back to college at the age of 29 and graduated with a bachelor’s degree in political science from Temple in 2.5 years and went on to earn a Masters in Public Administration from Rutgers University–Camden. She is a second-generation student at Rutgers Law in Camden; her mother graduated from Rutgers Law in 1995.

Koster lives in Ocean County with her three cats and a dog. She has earned approximately 128 pro bono hours from the Mediation Pro Bono Program and Bankruptcy Pro Bono Project.