"I love Rutgers and I love Camden, and I want people to believe me when I say, I love it here. This is a town with historic streets and families that have lived here for generations." 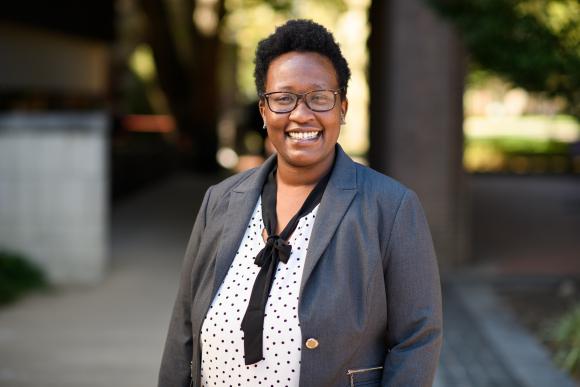 "My name is Mumbi, I’m a 2L. I am from Southern California. People often ask me, why did you leave beautiful California to come to bleak New Jersey?"

I take a walk on a Sunday afternoon to a nearby Camden park created by the NJ African American Heritage Council. Rutgers flags decorate columnal lights and I look at the sign proudly stating "Rutgers: Camden Campus." I remember walking to this park and admiring the sign just over a year ago, when I moved from California to Camden to start at Rutgers Law as a Summer Jump Start student.

The park is bustling. There is a family doing a photoshoot on the steps of the library which always has its lights on but is never open. The posing mother is pregnant, and is accompanied by her two daughters, and husband/photographer. Another family has set up a piano, where they will perform music and poetry, as a goodbye to a member of their family member who has decided to move to Scotland. They are called CPR, and used to play at our local Victor pub in another time not of Coronavirus. On the other side of the park, another photoshoot is taking place in the gazebo. A beautiful woman is dressed in a gold, form fitting dress and modeling. R&B music plays softly in the background. A man walks his dog and joins me in admiring the beautiful woman.

My name is Mumbi, I’m a 2L. I am from Southern California. People often ask me, why did you leave beautiful California to come to bleak New Jersey? I’m always taken aback by the question. I love it here, I explain. I was born up north in Livingston, New Jersey, but I moved away when I was seven to live in my familial motherland, Kenya, where I perfected my mother tongue, Gĩkũyũ. After Kenya, my family abruptly moved to Southern California where I grew up. I went to college in South Florida at the Wilkes Honors College of Florida Atlantic University (FAU) and triple-majored in Law and Society, Women’s Studies, and Spanish. Now, I’m back in my OG home state, to reclaim my birthplace through the study and practice of law.

I was therefore shocked to discover, via a sign the Council erected, that this park I love to frequent was a cite that white people used to sell and trade African slaves in the late 1700s. Err—what? This is so weird. Suddenly being made aware that years ago my Black brethren were bought and sold in this area I associate with joy and health supportive activity is horrifying. This grass I come to seek some green refuge and lay my feet down—which is supposed to help fight depression—was a depressing ground for my people not so long ago. How can I come to this place to seek healing, on this site of historical trauma, a trauma that when I look around at my surroundings, Camden is still healing from? Suddenly, I have so much compassion and understanding for this city called Camden. I get angry for all the times I’ve heard people, my own classmates and family members even, discuss this town in degrading terms, focusing more on its “crime rates” and unhoused population, rather that the historical legacy of slavery that has left this town underdeveloped.

In fact, if you walk just across the Ben Franklin bridge, there is so much undeveloped land in Camden you’d think you were in a so called “third world country.” Where are all the missionary’s efforts to focus on this land? Just beyond the bridge, the history of the white-supremacist neglect of this town and its people is visually striking. Pot holes and unpaved roads, with dangerous dips in them, are all over. The construction is slow, and leaves large pieces of road unavailable for what feels like way too long. The hypocrisy of going elsewhere to “fix” the rest of the world's problems is hypocritical and colonial, when there is so much decolonial work to do here.

I love Rutgers and I love Camden, and I want people to believe me when I say, I love it here. This is a town with historic streets and families that have lived here for generations. One of Camden’s famous neighborhoods, Parkside, is a thriving and redeveloping community—efforts championed by Black and Brown people to uplift fellow Black and Brown people. A true example of the beauty of missionary or missionary-like efforts.

I felt so grateful that last year, my cohorts and I in the Social Justice Scholars got to experience Camden our point of focus for the year 2020. I learned more about the development of this city from Professor Howard Gillette, though I do not remember discussing the fact that the slave trade that took place here. I recall learning with excitement that one of my favorite poets, Walt Whitman, who lived in and died in Camden, but felt sad to learn that he too had bought into notions of the false “scientific” construction of race, and believed that Black people were biologically inferior to Whites and somehow deserved to be enslaved. These ideas were accepted by majority culture as true at the time.

To this day, the words many people use to talk about Camden hides disgust, and lack compassion for the city. Disgust, Martha Nussbaum says, “is a denial of another’s humanity.” Condemning Camden before acknowledging the history of slave trade that took place here, on now Rutgers property, hides the history of capitalist white supremacy and its works to keep down a whole people.

Just as through colonialism Europe underdeveloped Africa, Walter Rodney argues, I argue that through slavery, the construction of race, and economic white supremacy, as even exemplified by Whitman’s views, Camden has been underdeveloped. But all land and all peoples are inherently worthy, and Camden is no exception. I hope these words can empower an out of state student who has people questioning why they would pick up and move to Camden to study at Rutgers Law—it’s worth it.

Studying law in Camden is a privilege, and I feel Rutgers Law in Camden is the place for me. There are lovely restaurants, like Corinne’s Place in Parkside, and lovely parks like the one Rutgers owns that I still love to frequent. There is history here, and I feel so grateful to get to study the law here—and even focus on how the law was used to justify the unjustifiable—the enslavement of other human beings.

My goal for the rest of my time here is to continue to engage with this city, as I would any other city like New York or Los Angeles if I moved there to study law. But I chose Camden, and I hope that Camden has chosen me also, and I look forward to enjoying the privilege of learning more about it.

Mumbi Ngugi, left is a 2L Juris Doctor candidate at Rutgers Law.  She is a Social Justice Scholar, who spent her 2020 Summer interning at the Homeless Advocacy Project in Philadelphia. In addition to studying law, Mumbi is also a poet and dancer, with a strong sense of spirituality.