"Knowing how to lay a proper foundation, move an exhibit into evidence, and give a compelling closing argument is not as easy as it looks on television!" 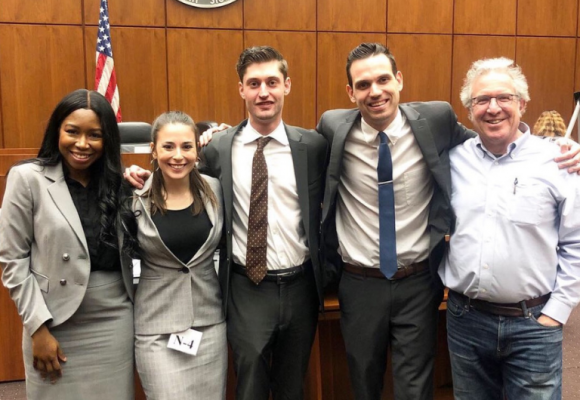 My first year on the Rutgers Law National Trial Team was a success! The entire experience was a lot of hard work, but every minute I spent preparing was absolutely worth it in the end. The skills I’ve learned—trial presentation, fact analysis, courtroom mechanics, and much more—will help propel me into being the best possible advocate I can be in the future as an attorney. In addition to about 20 hours a week of practice with the team, I also had to take Evidence and Mastery Trial Advocacy I & II. That way, we are learning how to try cases through both academics and practical field experience. Since I am only a 2L, I have another year on the team to progress further and continue my journey toward being an effective trial lawyer.

In March, my teammates and I participated in the John Marshall/ABA National Criminal Justice Trial Competition in Chicago, IL. The case we were to prepare was about a doctor who stood accused of prescribing a patient with a dangerous combination of drugs that caused his death. We were up against several excellent law school teams, including some from the Ivy League, but thanks to the amazing preparation we received from our team coaches (Dean Andrew Rossner, Ford Livengoode, and Samantha McCluskey) I felt extremely well prepared and confident going into the competition.

While it was a bit intimidating to try a case inside the U.S. District Court for the Northern District of Illinois, being in the Federal Dirksen Courthouse allowed everyone to feel like lawyers, not law students. After three nail-biting preliminary rounds, our team ended up going to the semi-finals, beating 17 out of 20 schools! Additionally, out of 80 total advocates participating in the competition, I received the individual award for Best Direct Examination.

The feedback I received from judges, attorneys, and other evaluators was both motivating and inspiring. It felt great to be rewarded for all the hours of practicing and preparation. Knowing how to lay a proper foundation, move an exhibit into evidence, and give a compelling closing argument is not as easy as it looks on television! This competition gave me the confidence to be able to do this in real life without a hitch. Overall, being in the Windy City was amazing from start to finish (and so was the deep dish pizza).

I’m grateful for my position on the team because it taught me a lot about myself and the realities of being an attorney. The trial team is stressful at times; it can be mentally and emotionally challenging because you, your colleagues, and your coaches become very invested in one another and the case material. But from it, I’ve gained a small group of people that I can trust and rely on—people who I know are committed to my growth. Even if we hadn’t advanced in two back to back invitational competitions this year, the friends and connections I’ve made would be more than enough of a prize to keep going.

I appreciate Dean Rossner and all of the work he’s put in toward making our team a success. His dedication toward trial advocacy and the advancement of our program is truly unmatched. This year, the team traveled to New York, Chicago, and West Palm Beach for four very high profile competitions. I’m excited to see where our trajectory takes us in the 2019-2020 season!

Opeyemi Akinde is a native New Yorker. In May 2017, she received a Bachelor of Arts from Rutgers University–New Brunswick in Political Science. She is currently a 2L (Class of 2020) at Rutgers Law School's Newark location and serves on the Moot Court Board, National Trial Team, and the Labor and Employment Law Society. She is also a Head Coach for the Legal Outreach North Star Middle School Mock Trial Program and a member of the Minority Student Program (MSP). Upon graduating from law school, she hopes to obtain a clerkship position and then move on to either a law firm or a government office/agency, preferably practicing labor and employment law.