"I was able to leverage institutional support to create a student-led food pantry." 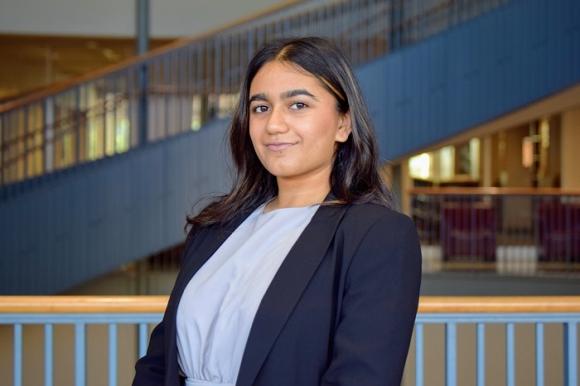 "Let's remove the stigma and break bread together at the JBJ Soul Kitchen."

It is no secret that the rising cost of higher education poses problems for students nationwide. The issues that students face include a vicious cycle of indebtedness, disproportionate access to proper physical and mental healthcare, and more. While institutions struggle to find ways to mitigate some of these concerns, Rutgers - Newark, by virtue of its student body, has been at the forefront of leading the charge on how to address barriers to student success.

One of the barriers I learned of as an undergraduate at Rutgers - Newark was food insecurity. Because of my leadership position as student body president, I was able to leverage institutional support to create a student-led food pantry, the PantryRUN, in 2016. This pantry is unique in many respects, chiefly that it was born of student need and led entirely by students in its nascent stages. The ground up movement at Rutgers - Newark `to battle food insecurity was well received by many and attracted the attention of the Jon Bon Jovi Soul Foundation.

The Bon Jovi's recognized the uniqueness of the PantryRUN and the crossroads at which it stood, serving students, faculty and staff on the most diverse undergraduate campus in the nation. The Bon Jovi's brought their innovative and successful model of a pay it forward kitchen to the table, and Rutgers - Newark brought its pantry and vivacious student body. Together, the two entities are setting forth on a collaborative effort that will not just be a part of the Rutgers - Newark community but will also be a pillar of what access to higher education has come to mean.

To eat at the JBJ Soul Kitchen at Rutgers - Newark, if you are willing and able to pay for your meal, you can pay $12 for a 3-course meal. If you are unable to pay, you are welcome to volunteer your time at the Soul Kitchen or at the PantryRUN for that same 3-course meal. The Bon Jovi's put it best when they noted that respect and dignity are always on the menu.

Now, as a law student I can see even more clearly the impact of services such as the PantryRUN and the Soul Kitchen. Many students will wait for events on campus in order to have a complete meal. We don't have to rely on the school's extra-curricular planning in order to eat well. Let's remove the stigma and break bread together at the JBJ Soul Kitchen.

Rahimah is a 2L student at Rutgers Law School. She is an Associate Editor for the Rutgers Law Record and is currently interning for the Deportation & Detention Defense Initiative within the Immigrants Rights Clinic at the Law School. This summer she will be joining the summer associate class for Clifford Chance LLP.