"As future litigators, practicing public speaking and creatively arguing your point on the fly is invaluable." 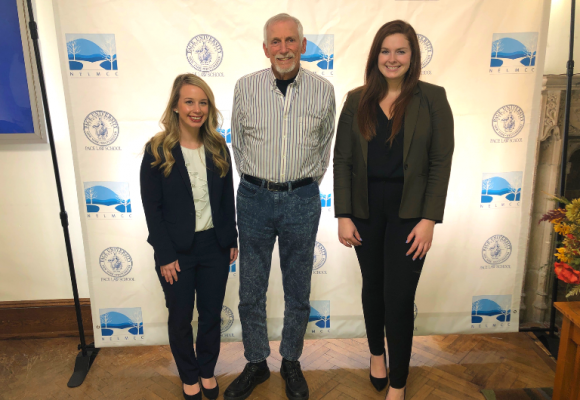 This past February, we competed in the Jeffrey G. Miller National Environmental Law Moot Court Competition (NELMCC) at the Elisabeth Haub School of Law at Pace University.

In the fall semester leading up to the competition, we wrote an appellate brief for the Appellants, who were threatened with losing their island homes, due to rising sea levels resulting from greenhouse gases emitted by a large U.S. corporation. We had to creatively argue our claims through the Due Process Clause of the Fifth Amendment, the Alien Tort Statute, and international Trail Smelter Principle. The arguments we made were very difficult as the law was stacked against us. We knew we were facing an uphill battle choosing to write the brief for the appellant, but took on the challenge because of how relevant these issues are and to show that substantial environmental progress can be achieved through the judicial system.

In preparation for oral arguments, we practiced 3-4 times a week, coached by Professor Neil Wise. We often traveled to area law firms, as well as practiced at the law school in front of professors, to receive feedback on our substantive arguments and performance. As future litigators, practicing public speaking and creatively arguing your point on the fly is invaluable. NELMC is unique in that there are three parties you are required to argue for over the course of the competition, which gives you the opportunity to attack a problem from all sides, noting every strength and weakness for each party's case.

At the competition, we argued against schools from all over the country. A total of 56 law schools were present and we especially enjoyed meeting other students from around the country that share a passion for environmental law. During the competition, we argued three times—one time for each of the three parties involved. Kylie was awarded best oralist in the second preliminary round while arguing for the corporate defendants. Overall, we had a great experience at the competition and were very proud of our accomplishments.

Kylie Finley is a second-year law student at Rutgers University. She received her undergraduate degree from the Catholic University of America, where she was an Honors scholar in Classical Philosophy and received a B.A. in Psychology, with a double minor in Spanish and Philosophy. While an undergraduate, Kylie played Varsity Softball and worked for Congressman Frank A. LoBiondo, in his D.C. office. At Rutgers, Kylie is the current Vice President of Women's Law Caucus and a Teaching Assistant for Criminal Law and Legal Writing and Research. While in law school, Kylie has worked for the Atlantic County Prosecutor's Office, Swartz Campbell, and the Appellate Division of the State of New Jersey. Kylie plans to use her law degree to pursue her interest in criminal prosecution.

Victoria Siegel is a second-year student and has dedicated her entire academic and professional career to promoting the responsible use and conservation of natural resources. Upon graduating from Rutgers School of Environmental and Biological Sciences in 2015, Victoria was employed as an Environmental Scientist, performing site investigations for the purpose of due diligence and remediation. Through this experience, Victoria was exposed to real-world examples of competing interests as it concerns environmental issues. These issues motivated her to understand the competing perspectives, knowing solutions are possible even where initial differences appear overwhelming. Victoria is seeking a law degree with the ultimate goal of transforming the way we interact with the environment through innovation, advocacy, and policy. Victoria spent her 1L summer interning for the New Jersey Office of the Attorney General in the Environmental Permitting and Counseling section. This summer, she excited to expand upon this experience at the federal level, during her internship with the United States Department of Justice in Washington D.C. in the Environmental and Natural Resources Division.