"Testifying to the New Jersey Assembly’s Judiciary Committee was an important step in what has been a long process that started well before I got to Rutgers Law." 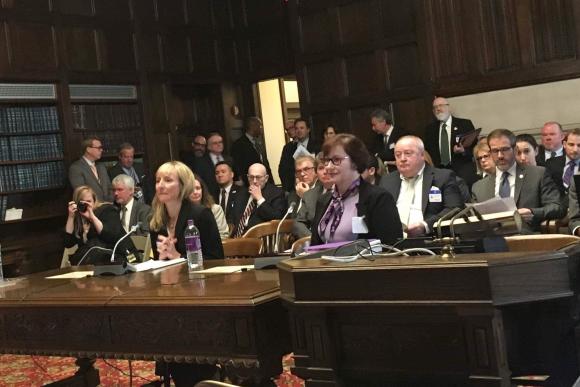 Last month, I testified to a Committee of the New Jersey Assembly in support of a bill that would create a task force of experts to examine what it would take to provide state-appointed attorneys to impoverished people involved in domestic violence restraining order hearings in New Jersey.

I was pretty nervous, but I was really excited to be there.

To bring readers up to speed, right now, in the State of New Jersey, a person filing for a domestic violence restraining order or defending against one, has no right to a state-appointed attorney if they cannot afford one.

These domestic violence hearings are trials but they are not criminal trials so there is no automatic right to an attorney if a person cannot afford one. A person who cannot afford an attorney, in a short period of time, must learn the area of law and then how to present their case. This includes submitting evidence, objecting, arguing the law, calling witnesses, and cross-examining witnesses. As the law stands, we are asking this of people who have no legal training and are in crisis.

I know a little bit of how hard it is to prepare a trial.  This semester it took me and three other law students six weeks to properly prepare for one—and that was a simulated trial. Nothing was at stake beyond our grades. Our personal safety wasn’t on the line.

In New Jersey, a right to a state-appointed attorney already exists in certain other types of non-criminal matters. If you face an $800 municipal fine, you are given that right to an attorney even if you cannot afford one. It’s the same if you face a driver’s license suspension. But, currently, if you are seeking or defending against a domestic violence restraining order there is no right.

Testifying to the New Jersey Assembly’s Judiciary Committee was an important step in what has been a long process that started well before I got to Rutgers Law. Over the last five years, a remarkable group of students have been working to bring the issue of right to counsel in civil domestic violence hearings in front of our state’s lawmakers.

The project began in 2013 when three Rutgers Law students, supervised by Professor Ruth Anne Robbins and Victoria Chase, wrote an amicus brief submitted to the New Jersey Supreme Court. Their brief argued in support of the Supreme Court taking up the issue of a right to state-appointed attorney in civil domestic violence matters. In 2014 the New Jersey Supreme Court decided not to take up the issue, which left it open until a few years later when three more students decided to start a new chapter in the project, approaching the New Jersey Legislature instead of the courts. That work continued for three years in the form of a directed practicum supervised by Professor Ruth Anne Robbins. Students researched the laws across many states and approached people in the Legislature to explain the issue.

This year the directed practicum developed into a Legislative and Policy Drafting class. Students in the class are working on different projects, including the Sexual Assault Survivor Protection Act and the challenging issue of unauthorized pelvic exams.

This is my second year working on the right to counsel project and I was just lucky enough to be enrolled in the class when the Judiciary Committee decided to vote on the bill.

Sara Gray is a non-traditional student who decided to go to Law School after working as a clerk for an Elder Law attorney. For her 1L summer, she interned at the Pennsylvania Innocence Project. In addition to her studies, she served as the President of the Association of Public Interest Law and was part of a collaborative ad hoc Innocence Committee including Rutgers Law, Forensic Science. “The Social Justice Program has allowed me to supplement my legal education with seminars and lectures that explore the current issues in Public Interest law," said Sara. "Further, the program offers substantive opportunities and guidance that help us reach our academic and career goals.”