"We learned that there is a lot more work that goes into being a litigator that isn’t just trial focused." 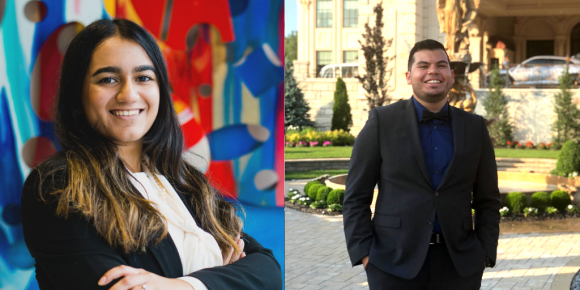 Rahimah Faiq and Christian Villatoro spent their summer helping AUSAs at the Department of Justice.

This summer we worked for the Department of Justice, whose motto, Qui Pro Domina Justitia Sequitur, translates to “Who Prosecutes on Behalf of Justice.”

Starting our work this summer at the United States Attorney’s Office (“USAO”), we went in expecting to see prosecutors in action. We expected to be at trial often and helping the Assistant United States Attorneys (“AUSAs”) prepare for those trials. What we weren’t expecting was the (sometimes) years of investigative work and cross-agency partnerships that culminate in drafting a charge.

We learned that there is a lot more work that goes into being a litigator that isn’t just trial focused.

Throughout the summer, we got to work on an array of matters on both the criminal and civil side. It was great to see our research, writing and other work actually play a part in bringing justice to the District of New Jersey. We helped the AUSAs through several research and writing projects that were used to prepare for their trials including memoranda on rules of evidence, draft jury charges, and briefs for court. We also assisted AUSAs in civil enforcement, ensuring that the public’s rights, such as the right to vote, weren’t infringed upon. We got to attend proffer meetings, depositions, and witness preparation sessions, learning many of the mechanics of what it takes to be a litigator.

Part of our summer program also consisted of several outings and trips. We went to speak with agents of Customs and Border Patrol at the Elizabeth Seaport and the Newark Airport to learn about their work in securing the nation’s entry points. We visited the Metropolitan Corrections Center in Manhattan, a federal pretrial jail, where we got to speak with some of the employees from the Department of Corrections. We also had the opportunity to learn about firearm safety from the FBI in Fort Dix and got to handle various firearms.

Our summer concluded in a day-long mock trial where we were either assigned to play prosecutors or federal public defenders. The rules of evidence were brought to life as we experienced what it took to file a motion and to make a successful objection. While it was an extremely nerve-racking experience, we learned and developed a newfound appreciation for trial attorneys. Not many first-year law students get to stand in a federal courtroom and present their case in front of well-seasoned and accomplished AUSAs.

What’s the secret to being a successful prosecutor, the ‘je ne sais quois’? We can say without a doubt the key characteristic of a successful prosecutor is good judgment. The AUSAs of the District of New Jersey exemplified good judgment at every stage of decision-making that we witnessed. Each AUSA we had the pleasure of working with acknowledged the gravity of charging a defendant and the balance they had to strike with keeping the public safe. Not every decision was an easy one, so it was critical to know that the people making the decisions wrestled with them and took the time to make sure they were doing what was right.

This summer opened our eyes to what work as a federal prosecutor entails. It was exciting to be part of an office that strives to protect the public good and working with the USAO made us realize the impact lawyers have on everyday life.

Rahimah Faiq is a second-year student at Rutgers Law. She is Vice-President of APALSA and a Law Fellow for Center for Security, Race and Rights. She is also a member of the Minority Student Program.

Christian Villatoro is a second-year Rutgers Law student and Co-President of ALALS. He is also a member of the Minority Student Program.