The First Monday in October is the official start of the Supreme Court term and at Rutgers Law School, is traditionally recognized by a speaker's panel on a timely court topic.

Over the years, First Monday events have included experts and discussions on voting rights, affirmative action, housing, civil rights, bringing in professors and leading scholars from around the United States to offer insight to law students and other guests. 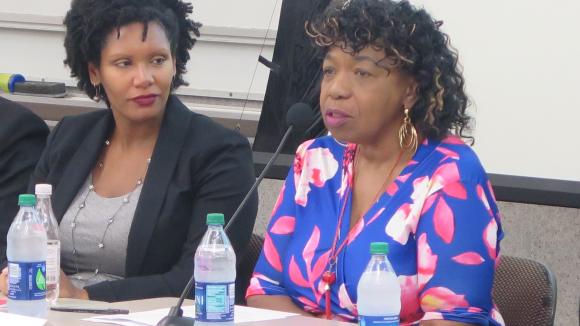 Gwen Carr, right, the mother of Eric Garner, talks about her experiences at First Monday. To her left is Rutgers Law School Professor Alexis Karteron.

Gwen Carr, the mother of Eric Garner, a Staten Island man who died in 2014 after being put in a police chokehold, addressed the impact of excessive police force at Rutgers Law School’s First Monday event.

“Communities of color are treated differently,” she said. “Where you live shouldn’t define if you live.”

Carr was joined by Jay Rehman, the Director of the Council on American-Islamic Relations; Rosa Cohen-Cruz of The Bronx Defenders, Sara Cullinane from Make the Road NY, and by two Rutgers Law School Professors, Sahar Aziz, an expert on the Middle East and Islamic issues; and Alexis Karteron, Director of the Constitutional Rights Clinic.

The panelists were brought together to discuss three cases before the United States Supreme Court: the travel ban in the context of rising Islamophobia (IRAP v. Trump), the criminal justice system’s impact on immigrant communities (Sessions v. Dimaya), and the issue of excessive use of force by the police (Los Angeles v. Mendez). First Monday marks the beginning of the Supreme Court Term.

Karteron talked about Los Angeles v. Mendez, a Los Angeles case where sheriff’s officers came to a home looking for a parole violator, searched the house and went into a backyard and entered into another dwelling without warning or identifying themselves as officers. The man inside the dwelling had a BB gun, and he and his companion were both shot by police, though he was not the parole violator.

Karteron said the case raised issues of police use of force, whether the shooting victim’s Fourth Amendment rights were violated, and whether an officer can be held liable if he provokes a confrontation.

For Carr, Los Angeles v. Mendez brought up issues that were personal. She said, “I’m out here and trying to advocate against all this brutality. I’m advocating to try to save the lives of our young men and women out there. We’re treated differently whether we are in the suburbs or urban cities.”

Carr alleged that young people of color, are more likely than their Caucasian counterparts, to be arrested rather than given a warning or a ticket, and are more likely to be shot multiple times. “It may be too late for my son, but we’ve got to try and save other lives,” she said.

Aziz walked through the history of  President Trump's proposed travel ban, which initially prohibited people from seven predominantly Muslim countries from coming to the U.S., and restricts refugees from coming into the U.S. The ban, and a revised version released months later, has inspired lawyers across the United States to challenge its legality. Rehman said since the ban was proposed,  Muslims in America have had a growing fear of being seen as “outsiders” and “unwanted.” The ban has impacted celebrities, Olympic athletes, and college students, including a Rutgers student who was stranded in Syria after visiting her mother over winter break.

Rehman, who said he left his commercial litigation job to work in civil rights, said it’s important that Muslims aren’t fighting these bans alone. Under the Trump Administration, he said, “Religion is becoming a polarizing issue.” He added, refugees, who are running from terrorists, including ISIS and Al Qaeda are now being accused of terrorism.

Cohen-Cruz, who spoke about Sessions v. Dimaya, talked about defending immigrants who are being subject to deportation. She said her clients are reluctant to take plea deals because they risk deportation, even for minor infractions, but also risk longer prison sentences if they fight in court and lose. The Immigration and Customs Enforcement agents are using the criminal justice system to target immigrants for deportation and have stopped parents on their way to work, searched community colleges, and raided work places, she said. Many of the immigrants targeted do not have a police record, have lived in the United States for many years, and some are eligible for Deferred Action for Childhood Arrivals.

“One small interaction with criminal justice can have an extraordinary impact on someone’s life,” she said.

Also at the First Monday event, the Eric R. Neisser Award was presented to Victor Monterrosa, Jr. ’14, a staff attorney at Covenant House of New Jersey, member of the Newark Civilian Complaint Review Board, a community organizer with the Greater Newark HUD Tenant Coalition, and a board member of the Urban Cooperative Enterprise Legal Center.

“I’m a home grown people’s lawyer,” Monterrosa said, after receiving the award. “I’m very proud of my city and I’m hell bent on abolishing all forms of oppression.”

The First Monday event was organized by Susan Feathers, the Assistant Dean for Pro Bono and Public Interest, and by Professor Jeena Shah, who is a Clinical Professor in the Constitutional Rights and International Human Rights Clinics. The Frank and Marilyn Askin Fund sponsored the program. 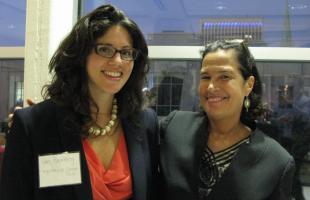 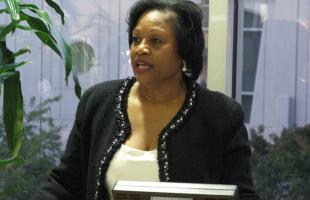 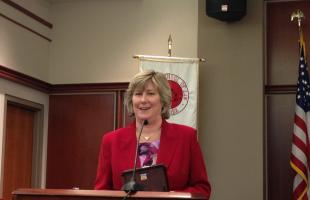 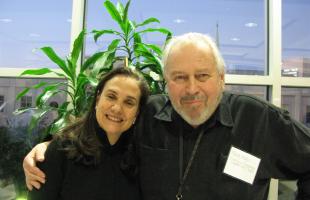 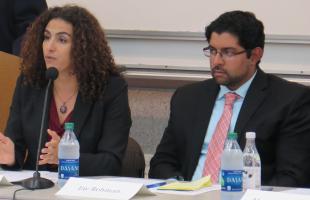 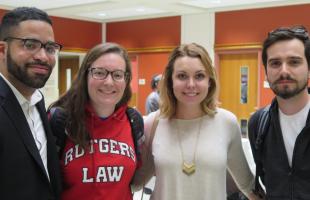 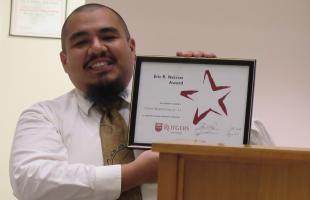