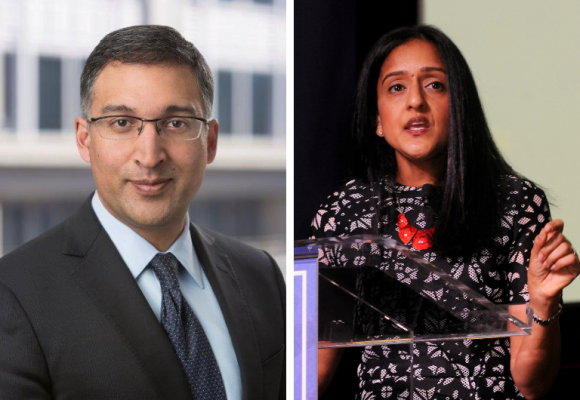 Neal Katyal (left), former Acting Solicitor General of the United States, will speak in Camden. Vanita Gupta (right) is an experienced leader who has devoted her career to working in civil rights and will speak in Newark.

The former Acting Solicitor General of the United States and the former head of the U.S. Department of Justice’s Civil Rights Division will be the keynote speakers at this year’s Commencement ceremonies for Rutgers Law School.

Students in Camden will graduate on May 23 at 9:30 a.m. at the BB & T Pavilion in Camden. Newark students will graduate at 10 a.m. on May 24 at the New Jersey Performing Arts Center in Newark.

In Camden, the keynote speaker will be Neal Katyal, the former Acting Solicitor General of the United States, who is now a partner at Hogan Lovells in Washington D.C. In December 2017, American Lawyer magazine named him The Litigator of the Year; he was chosen from all the lawyers in the United States. At the age of 48, he has also already argued more Supreme Court cases in U.S. history than has any minority attorney, recently breaking the record held by Thurgood Marshall.

He has extensive experience in matters of patent, constitutional, technology, securities, criminal, employment, and tribal law. He has orally argued 38 cases before the Supreme Court of the United States, with 36 of them in the last nine years. In the 2016-17 term alone, Katyal argued seven cases in six separate arguments at the Supreme Court, far more than any other advocate in the nation—nearly 10% of the docket.

Prior to joining Hogan Lovells, Katyal served as Acting Solicitor General of the United States, where he argued several major Supreme Court cases involving a variety of issues, such as his successful defense of the constitutionality of the Voting Rights Act of 1965, his victorious defense of former Attorney General John Ashcroft for alleged abuses in the war on terror, his unanimous victory against eight states who sued the nation's leading power plants for contributing to global warming, and a variety of other matters.

Katyal is the recipient of the very highest award given to a civilian by the U.S. Department of Justice, the Edmund Randolph Award, which the Attorney General presented to him in 2011. He recently played himself, arguing a Supreme Court case against the Solicitor General, in an episode of House of Cards on Netflix.

Newark’s Commencement speaker Vanita Gupta is an experienced leader who has devoted her career to working in civil rights. Gupta is president and CEO of The Leadership Conference on Civil and Human Rights, the nation’s oldest and largest civil rights coalition charged by its diverse membership of more than 200 national organizations to promote and protect the civil and human rights of all persons in the United States. Before joining The Leadership Conference in June 2017, she served as Acting Assistant Attorney General and head of the U.S. Department of Justice’s Civil Rights Division from 2014-2017. Appointed by President Barack Obama as the chief civil rights prosecutor for the United States, Gupta oversaw a wide range of criminal and civil enforcement efforts to ensure equal justice and protect equal opportunity for all.

Under Gupta’s leadership, the division did critical work in a number of areas, including advancing constitutional policing and criminal justice reform; prosecuting hate crimes and human trafficking; promoting disability rights; protecting the rights of LGBTQ individuals; ensuring voting rights for all; and combating discrimination in education, housing, employment, lending, and religious exercise.

Prior to joining the Justice Department, Gupta served as Deputy Legal Director and the Director of the Center for Justice at the American Civil Liberties Union (ACLU). She joined the ACLU in 2006 as a staff attorney, where she subsequently secured a landmark settlement on behalf of immigrant children from around the world detained in a privately-run prison in Texas that ultimately led to the end of “family detention” at the facility. In addition to managing a robust litigation docket at the ACLU, Gupta created and led the organization’s Smart Justice Campaign aimed at ending mass incarceration while keeping communities safe.

Gupta began her legal career as an attorney at the NAACP Legal Defense & Educational Fund, where she successfully led the effort to overturn the wrongful drug convictions of 38 individuals in Tulia, Texas, who were ultimately pardoned by Governor Rick Perry. She then helped negotiate a $6 million settlement on behalf of her clients. She also consulted with European civil society organizations working to advance the rights of the Roma.