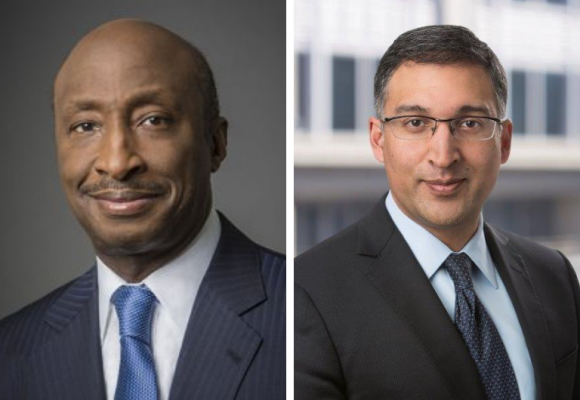 Kenneth C. Frazier, chief executive officer and board chair of Merck & Co., and Neal Katyal, former Acting U.S. Solicitor General, will receive honorary Doctor of Laws degrees from Rutgers University–Camden during the Rutgers Law School commencement ceremony on Thursday, May 23, the Rutgers University Board of Governors announced at its regularly scheduled meeting on April 9.

Each recipient will deliver remarks to the Class of 2019 at that ceremony.

“Prof. Katyal is one of our nation’s most powerful voices in defending the rights that our nation holds so dear. His career has helped to protect the core values of our democracy and his ongoing work contributes to our understanding of how American law and history define our daily lives.

“Mr. Frazier exemplifies the very essence of the ideal for corporate citizenship in America. His visionary leadership has helped to establish Merck globally as a model for how an organization can deliver value to its customers and shareholders while operating in a transparent and ethical manner in all of its processes,” says Haddon.

Under Frazier’s leadership, Merck (known as MSD outside the United States and Canada) delivers innovative lifesaving medicines and vaccines as well as long-term and sustainable value to its multiple stakeholders. Frazier has substantially increased Merck’s investment in research, including early research, while refocusing the organization on the launch and growth of key products that provide benefit to society. In addition, he has led the formation of philanthropic and other initiatives that build on Merck’s 125-year-plus legacy.

He sits on the boards of PhRMA, Weill Cornell Medicine, ExxonMobil Corporation, and Cornerstone Christian Academy in Philadelphia. He also is a member of the American Academy of Arts and Sciences, The Business Council, the Council of The American Law Institute, and the American Bar Association.

In a Harvard Business Review interview, Frazier stated “Businesses exist to deliver value to society.” This comment reflects his staunch convictions, which have positioned him nationally as a compelling voice for equal rights for all Americans. Frazier is one of the country’s few African-American CEOs leading a large, publicly traded company.

Katyal is the Paul Saunders Professor at Georgetown University Law Center and is a partner with Hogan Lovells in Washington, D.C. As Acting Solicitor General of the United States, he argued several major Supreme Court cases, including his successful defense of the constitutionality of the Voting Rights Act of 1965 and his victorious defense of former U.S. Attorney General John Ashcroft for alleged abuses in the war on terror. As a professor at Georgetown, in his first Supreme Court argument, Katyal won Hamdan v. Rumsfeld, the case that shut down the Guantanamo military tribunals.

He has orally argued 38 cases before the U.S. Supreme Court, where he recently surpassed Thurgood Marshall as the minority attorney who has argued the most Supreme Court cases in the history of the United States. Katyal is the recipient of the very highest award given to a civilian by the U.S. Department of Justice, the Edmund Randolph Award, which the Attorney General presented to him in 2011. He was named American Lawyer’s Litigator of the Year last year, selected among all attorneys in the United States.

Katyal previously served as national security advisor in the U.S. Department of Justice and was commissioned by President Bill Clinton to write a report on the need for more legal pro bono work. He served as Vice President Al Gore’s co-counsel in the Supreme Court election dispute of 2000, and represented the deans of most major private law schools in the landmark University of Michigan affirmative-action case Grutter v. Bollinger (2003). Katyal clerked for U.S. Supreme Court Justice Stephen Breyer as well as Judge Guido Calabresi of the U.S. Court of Appeals. He attended Dartmouth College and Yale Law School.

Rutgers University–Camden will confer the honorary degrees to Frazier and Katyal during the ceremony for Rutgers Law School’s Camden location at the BB&T Pavilion on the Camden Waterfront at 9:30 a.m. Thursday, May 23. Additional ceremonies will be held at the same location on Wednesday, May 22, and Thursday, May 23. More information about Rutgers Law Commencement events.