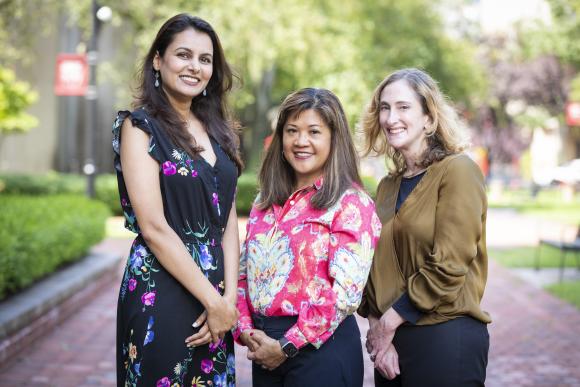 The current history-making leadership team of Rutgers Law School is a testament to the school’s longstanding commitment to excellence and diversity. Rose Cuison-Villazor, a Chancellor’s Social Justice Scholar, became the Interim Co-Dean of the Newark campus on July 1, when Co-Dean David Lopez stepped down to return to the faculty. Cuison-Villazor is the first female Asian-American Dean at Rutgers Law School and the first Filipina American Dean of a U.S. Law School. Cuison-Villazor, an expert in immigration, citizenship, property law, and race and the law served as the Vice Dean in Newark from July 2019 until her move to the Co-Dean’s office this summer. She is the founder of the Rutgers Center for Immigration Law, Policy and Justice.

At the time of her appointment, Cuison-Villazor shared her excitement about leading the law school’s Newark campus during the return to campus. “I am looking forwarding to continuing the law school's commitment to academic excellence, inclusivity, and social justice and ensuring Rutgers University-Newark continues as an anchor institution,"she said.

Cuison-Villazor will work closely with Co-Dean Kimberly Mutcherson, a noted bioethics and reproductive justice scholar and higher education leader. Mutcherson is also a first at Rutgers Law School. When she assumed the deanship in Camden on January 1, 2019, she became the first woman, the first Black person, and the first LGBT law dean at Rutgers.

Mutcherson is enthusiastic about working with this dynamic team and co-leading the Law school with Cuison-Villazor.

“I have known my new Co-Dean for many years, first as an admirer of her scholarship and then as a colleague and friend,”  Mutcherson said. “Having worked very closely with her while she was Newark’s Vice-Dean, I could not be more thrilled to share leadership responsibilities with someone of her caliber. I am energized by our shared vision for the law school, and I am looking forward to moving forward and continuing to achieve excellence as a merged institution.”

The powerful duo will be working with two new vice deans – Anjum Gupta and Stacy Hawkins – who will serve in Newark and Camden respectively. Gupta, who is South Asian American, is the Director of the Immigrant Rights Clinic in Newark and teaches refugee law and professional responsibility. Hawkins, who is African American, is a frequent writer and sought-after speaker on issues of diversity and the law and employment law. She teaches Constitutional Law, Employment Law, and a popular seminar on Diversity and the Law.

The new Associate Deans for Academic Affairs also happen to be women. Victoria Chase and Caroline Young bring unique skills to their new roles. Chase, a Rutgers Law graduate, is the Director of the Domestic Violence Clinic in Camden and teaches a variety of other courses at the law school. Young is the Associate Director of the Law Library in Newark and works with students as they develop their legal research skills. She also served as the Associate Dean of Distance Learning during the 2020-2021 academic year and supported faculty who needed to rapidly move their courses on line.

The new leaders began their roles on July 1.

The female heavy leadership team comes at a time when more women than ever are leading U.S. law schools. Though women have comprised about 50% of law school students since 2016, it has taken many years for that change to trickle up into the leadership ranks. In 2000, only 10% of law school deans were women. By 2009, that number rose to 21%, and as of June 1, 2020, an all-time high of 41% of all law school deans are women, according to the American Bar Association. That number rose to 44.8 percent this year, according to the American Association of Law Schools.

This year has also brought the highest number of women of color, especially Black women, serving as deans at U.S. law schools. While the legal profession as a whole continues to lack significant racial diversity, particularly in the upper echelons of leadership, the changes taking place in law school perhaps portend a bright future in leadership for law students who are women or people of color, or both.

This impressive group of leaders will steer Rutgers Law through another year impacted by COVID, during which, the focus will be on keeping the law school community safe. The plans for this academic year are ambitious and this leadership team has a great deal of work ahead of it. As the year progresses, the Co-Deans look forward to sharing more information about this group and the future of the law school.

Hear from members of the leadership team in their own words, on the Rutgers Law podcast, The Power of Attorney:

The Role of Media in Democracy with Professor of Law, Ellen Goodman